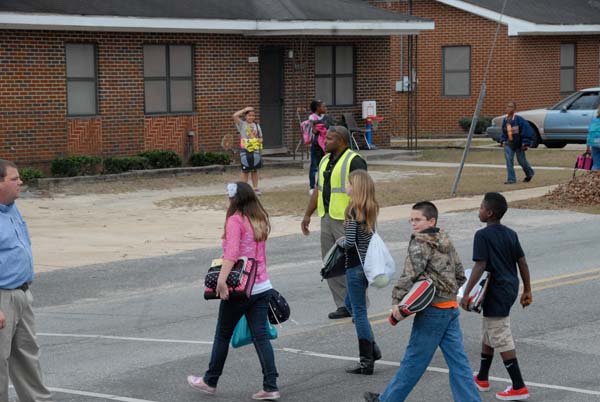 Maurice Gaines, the school resource officer assigned to Hutto Middle School, watches students cross the street after school to where parents’ cars wait for them.

The Decatur County Schools have taken extra precautions, in the wake of the school shooting tragedy in Newtown, Conn., this past December.

The Newtown shooting happened on the last day of school before winter break for Decatur County schools, so schools weren’t able to address the issue until students went back to class on Jan. 8.

Decatur County School Superintendent Dr. Fred Rayfield said that while he hasn’t noticed any anxiety among students related to the tragedy, he has been contacted by parents regarding the issue of school security.

“There’s a heightened level of concern from parents, who just want to make certain that we are maintaining a safe enviroment for their children,” Rayfield said. “I don’t mind taking those calls from parents, because it’s my job. As a parent myself, I understand their concern.”

Administrators and teachers had returned for pre-planning the day before students reported back. Part of the pre-planning included a review of school safety plans and procedures. While school safety is routinely reviewed, this time special attention was given to how teachers could minimize danger in the event of a school shooting.

All eight of Decatur County’s schools had recently updated their school safety plans, several months before the tragedy in Connecticut, and those plans are available on each school’s web site under the link “Important Information for Parents.”

The plans contain detailed information about who is responsible for what in the event of an emergency, and gives an overview of how each school would respond to a variety of emergency situations.

In the aftermath of the tragedy, Rayfield communicated with each school’s principal, emphasizing that they should let parents know the safety plans were available for review. He also stressed that the information contained in the plans — including for example, the procedures for a school lockdown — should be accessible and visible to all school staff, from teachers to lunchroom staff.

At Hutto Middle School, Principal Roy Mathews created a laminated one-page summary of school lockdown procedures that each teacher has posted in his or her classroom. The document summarizes the different stages of a lockdown: For example, at Stage 1, which occurs when there is an external danger in the general area of the school, staff make sure all outer doors are secured. 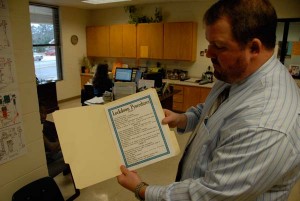 Hutto Middle School Principal Roy Mathews shows off a laminated, one-page summary of school lockdown procedures that will be posted in each of his school’s classrooms to give teachers a quick reminder of what to do in different stages of a lockdown. The lockdown procedures were developed with the help of local law enforcement.

“That’s much different than a lockdown situation inside the school, which would require students to go into locked classrooms, so it’s helpful for all of the teachers and staff to know the right steps to take,” Rayfield said.

“There has been a heightened awareness among all school employees regarding safety [since the Newtown tragedy],” he said. “Since school has been back, I’ve received a number of suggestions from administrators about how security could be increased on their individual campuses.

“As terrible as the shooting in Connecticut was, some good, productive thinking about school safety has happened as a result.”

Rayfield said he has also taken administrators’ suggestions of how physical security — such as the placement of gates, fences and entrances — can be improved.

In the Newtown tragedy, the shooter, Adam Lanza, broke through a glass barrier in the school’s lobby and hit a button to unlock the doors leading from the lobby into the school’s hallway. That kind of secure barrier, designed to restrict how visitors can access the main part of a school, is currently only present at Bainbridge High School, West Bainbridge Elementary School, Hutto Middle School and Bainbridge Middle School (the former BHS), where it was installed in the summer of 2012.

Rayfield said secure entrances will be designed into the new Jones-Wheat Elementary School, which is being re-built because the current building is outdated and beyond repair.

At other elementary schools in Decatur County, visitors are asked to sign in at a school’s front office. However, there is no guard or locked door preventing someone from bypassing the front office. 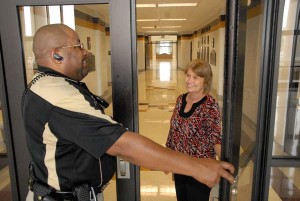 That naturally concerns the superintendent, who said he wants to retro-fit secure access to the remaining schools that don’t have them, as time and money permit.

“Adding extra levels of security is expensive, though certainly that shouldn’t stop us from taking those steps,” Rayfield said. “I’m sure there will be some discussions between the Board of Education members about how to best allocate the resources we have to make our schools more secure in a timely manner. Their decisions could include some combination of people, equipment and building improvements.”

The week after the Newtown tragedy, the National Rifle Association suggested that one way to prevent future shootings could be to place an armed guard at each school in the country. Currently, there are four school resource officers working in Decatur County Schools — two at the high school and one at each middle school. Each of those officers is certified as a peace officer in Georgia, meaning they have the same training as a traditional police officer. 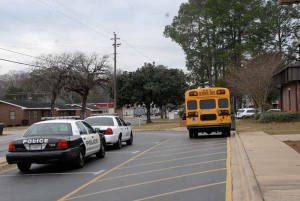 “If you asked me my personal vision of an ideal situation — yes, I would love to have an officer on every campus,” Rayfield said. “However, there are financial aspects to consider. When you add up the cost of uniforms, salary, equipment and insurance benefits, you’re looking at adding approximately $50,000 per position to the schools’ annual budget.”

Rayfield said he hopes to discuss the matter with the board again, and devise a plan to increase the number of officers working in the schools.

“Immediately, what we have done is instructed our existing officers to build into their day some time they spend doing ‘drop-in’ visits at the elementary schools,” he said.

In November 2012, Bainbridge Public Safety hosted a course called “Crisis Management for School-Based Incidents,” which was sponsored by the Federal Emergency Management Agency. Representatives from a number of local agencies attended the class, which covered topics ranging from potential school vulnerabilities to how school and community officials might identify persons who could pose a threat, before they act.

In addition, school officials have collaborated with Bainbridge Public Safety, the Decatur County Sheriff’s Office and all of the agencies that might have to respond to a school emergency, Rayfield said. 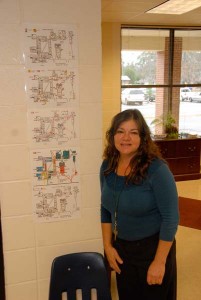 Patty Faircloth, an administrative assistant at Hutto Middle School, stands beside a set of color-coded diagrams she created to show teachers, staff and students where to go in the event of severe weather, a fire or other emergency. Copies of the diagrams are posted in each classroom.

Bainbridge Public Safety Director Eric Miller said he and his officers take their responsibility for school safety “very seriously.” In conjunction with the Sheriff’s Office and the Georgia State Patrol, BPS works with school officials to develop and practice the school’s emergency response plans.

Along with each school’s safety plan, a detailed map of each school is kept on file with local law enforcement, and school officials talk with officers about potential hazards and how they might respond if they occur.

“We also do other advanced training as part of our pre-incident planning, such as active shooter or fire training drills, as well as how we respond to the schools,” Miller said.

Reflecting on the Newtown tragedy, Rayfield said he and other educators were affected by the stories of how teacher Vickie Soto — who was fatally shot by Lanza — and others took actions to save the lives of their students. Rayfield said it underscored for him the importance of preparing for worst-case scenarios, even if a person believes they won’t happen in their school system.

“School safety plans are something that have a tendency to be easily shelved and not revisited,” Rayfield said.

He recalled how teachers and staff felt about the time and effort to create each school’s safety plan last year.

“At the time it was intense, and a lot of extra work for everyone,” Rayfield said. “Now today, they know exactly why we did that. Everyone has the school safety plan in their hands and everyone knows the steps they would take in an emergency.” 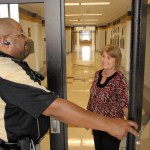 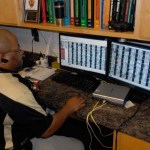 School Resource Office Chief Paul Gordon reviews a computer-based video surveillance system that lets officers see what is going on in various hallways and outside the school. 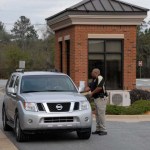 School Resource Office Chief Paul Gordon stops the vehicle of a visitor arriving at Bainbridge High School. School staff use gates and cones to control outside access to the school’s parking lots. 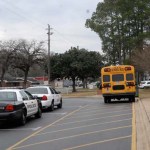 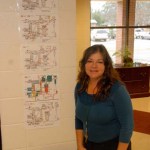 Patty Faircloth, an administrative assistant at Hutto Middle School, stands beside a set of color-coded diagrams she created to show teachers, staff and students where to go in the event of severe weather, a fire or other emergency. Copies of the diagrams are posted in each classroom. 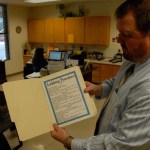 Hutto Middle School Principal Roy Mathews shows off a laminated, one-page summary of school lockdown procedures that will be posted in each of his school’s classrooms to give teachers a quick reminder of what to do in different stages of a lockdown. The lockdown procedures were developed with the help of local law enforcement. 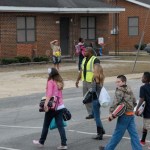 Maurice Gaines, the school resource officer assigned to Hutto Middle School, watches students cross the street after school to where parents’ cars wait for them.

Belvin celebrates a century of life