Train derails near Bainbridge, nobody hurt 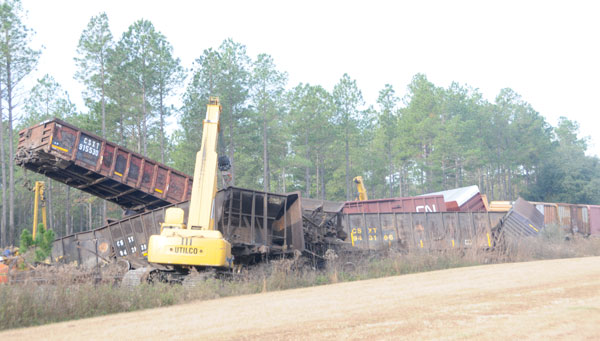 Officials with CSX Transportation and other safety officials clean up the mess Monday morning, after a train derailed late Sunday evening, about half a mile north of the intersection of Cooler Road and Dothan Road.|Justin Schuver

Decatur County Sheriff Wiley Griffin said that a train derailed late Sunday evening in the county, but nobody was injured, no cargo was lost, and no considerable damage was done.

Griffin said that about half the cars in a 50-car train left the track Sunday at approximately 10 p.m., about half a mile from the intersection of Dothan Road and Cooler Road. Griffin said the cars were mostly empty flatbeds, were not carrying any freight, and nobody was injured.

The train, which is owned and operated by CSX Transportation, was still being removed from the tracks Monday morning, Griffin said. He said the derailed cars could be completely removed by midnight Monday.