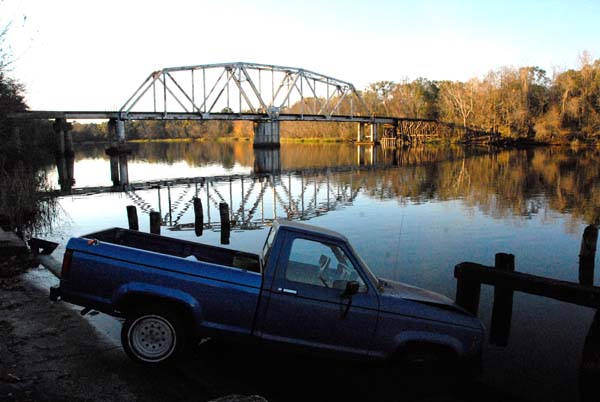 The two ladies were fishing at Cheney Griffin Park, when the Ford Ranger they were sitting in rolled down the boat landing and into the water. The remnants of an old wooden dock at the landing stopped the truck from going more than a couple of feet into the water.

Two friends who were fishing nearby, Jeremy Williams and Shawn McLendon, saw the truck rolling down the ramp and ran to help.

The pickup’s driver, whose name was not immediately known, jumped out of the truck while it was still moving and she fell to the ground, said Williams, who ran to check on the passenger.

The woman riding in the passenger seat stayed put but may have hit her head on the interior of the truck’s windshield as it slowly crashed into the water at an angle, Williams said.

Meanwhile, McLendon stepped into the water to get inside the truck and put its gear in park. McLendon said he believes the driver was trying to put her truck in reverse, but the shifter got stuck between gears and caused the truck to roll forward.

Williams and McLendon then helped the elderly passenger out of the truck and onto dry land, as Bainbridge Public Safety and Decatur County Emergency Medical Services responded.

Both women were treated by EMS at the scene and did not appear to be seriously injured. 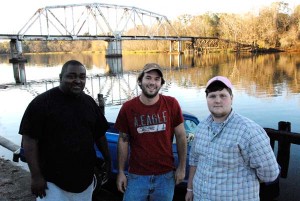 Eric Roberts, Shawn Mclendon and Jeremy Williams were all nearby at Cheney Griffin Park when two elderly women riding in a pickup truck rolled into the Flint River.

The Bainbridge City Council has shown it is serious about cleaning up a historic cemetery, after citizens and city officials... read more