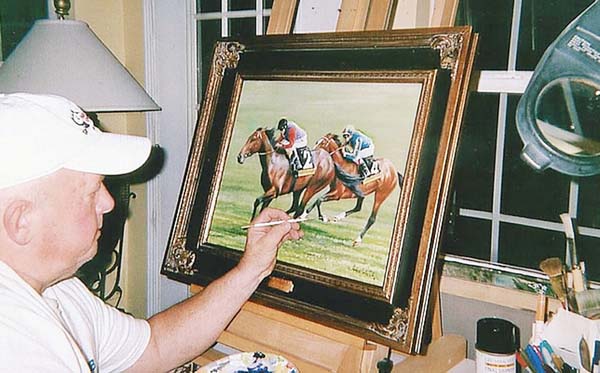 James Partee Jr., a 1967 graduate of Bainbridge High School, got the thrill of a lifetime earlier this year, when he had the chance to have a face-to-face visit with Her Majesty, Queen Elizabeth II, of the United Kingdom.

Partee has had a long and successful career as a wildlife artist, but he might have achieved the highlight of that job just a few months ago. Partee and his artist friend, Michael Collins of Oklahoma City, Okla., were each asked to paint some of Queen Elizabeth II’s favorite hunting animals, and were invited to personally present those paintings to the queen at her private residence in Sandringham, England, on April 15.

“This was truly a once in a lifetime experience,” said Partee, who now lives in Kennesaw, Ga. “It was the most honored I’ve ever felt.”

Partee said he was at a charity show in Las Vegas in 2011, when he and Collins light-heartedly discussed that Queen Elizabeth II “needed a Partee and Collins original” for her art collection. Listening to that conversation was Graham Browne, a long-time friend and associate of the British royal family.

“Two weeks later, I got an email from Graham, who said he had recently seen the queen, and that ‘her majesty would like to see if you gentlemen would be interested in painting some of her sporting animals,’” Partee said. “We couldn’t believe all this, and of course we said yes.”

Partee painted “Carlton House,” one of Queen Elizabeth II’s favorite race horses, and Collins painted “Muskett,”one of her most prized hunting dogs. He received 80 different photographs of the horse, to use as a model for his painting.

Partee thought the request for his painting talent was honor enough, but the stakes were raised even higher about two weeks later.

“We got another email later, from Buckingham Palace, that upon completion of the paintings, the queen was requesting a personal audience with us in England,” he said. “My blood pressure really shot up after that!”

Partee and his wife, Dale, as well as the Collinses, were invited guests of the royal family for five days in April, visiting historic and natural sites in England before their private meeting with the queen. On that Sunday, April 15, Partee was also invited to attend worship services at St. Mary Magdalene Church, the royal family’s chapel on the Sandringham estate.

Shortly after the completion of the services, Partee and Collins had the chance to have a face-to-face, personal discussion with Queen Elizabeth II.

“It was truly amazing to have the chance to speak with her,” Partee said. “The more I talked with her, the more she began to speak to me as if I were a family member. She was very friendly and smiling the whole time, and you could tell that she was really listening to us and paying attention to what we were saying.”

Partee said his family raised horses in Bainbridge when he was growing up, so he was able to talk with the queen about that particular subject — she is an avid horse fan. He also jokingly told her that she would love Atlanta, because that city had hosted the Olympics and London was preparing to host the Olympics as well.

At the end of the conversation, Partee said that Queen Elizabeth II said it was fine for Partee and Collins to make prints of the paintings, but she requested that they not be sold and instead be used for charity or wildlife-related causes. She also requested six additional prints for her own collection, in addition to receiving the original artwork from the artists.

“This is the only time that the queen has asked for a private artist to paint any of her favorite animals, and the first time that she has invited private individuals to meet with her in this way,” Partee said. “I was talking with Graham, and he jokingly said that ‘The president of the United States couldn’t have done what you just did.’”

Prints of artwork will be on display at wild game dinner Dec. 6

Prints of Partee’s painting of Carlton House, and Collins’ painting of Muskett, will be shown Thursday, Dec. 6, at the Bainbridge Country Club’s wild game dinner. Also on auction will be an original Partee work, a painting of two setters titled “Huntin’ Buddies.”

There are still approximately 20 tickets available to the event. For more information or to purchase a ticket, call the Bainbridge Country Club at (229) 246-1986.