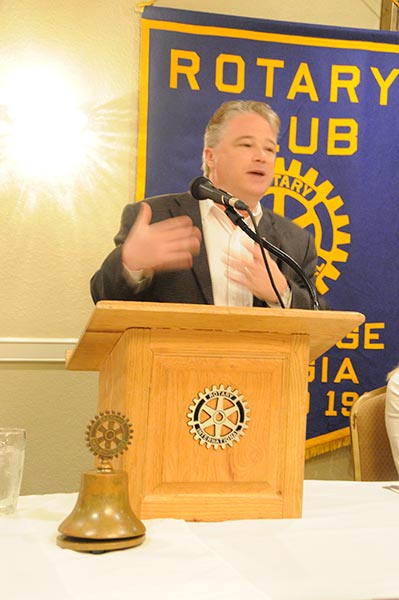 Beam noted that stress can take its toll on a person’s physical body, but the source of stress is actually often found in the mental and spiritual health of a person.

“When we’re talking about stress, a lot of times the first question we ask is, ‘How do I feel?,’” he said. “But we have to go beyond that. Stress isn’t just about our emotional health, but also our mental health.”

Beam said some people believe that they can “change how they feel,” but that is next to impossible. As an example, he asked the club members to “get angry right now,” but obviously none of them could instantly bring up such emotion.

“If you change your thoughts, you can often improve your physical state as well,” Beam said.

He noted that a common remedy to stress is to “count to 10,” but he said that solution doesn’t use enough brain power and we will continue to think about the stressful moment instead.

Beam also expressed his belief in spiritual health as being a great way to combat stress.

“Just spend five minutes a day in prayer and you’ll be amazed at the difference it can make,” he said. “Focus on one or two passages of the Bible, and just think about how they can be applied to your life.

“The Word of God is always going to be solid, and never-changing. It can be that foundation that you can come back to when the world is hectic and your thoughts are cluttered.”

He also recommended a faith-based solution to another common outcome of stress — failure to sleep.

“If you’re having trouble sleeping, don’t count sheep,” he said. “Count your blessings.”

Samaritan Counseling Center of Southwest Georgia is a not-for-profit organization that offers faith-based services, including counseling and spiritual guidance, to anyone in need of help in southwest Georgia. Beam noted that no Decatur County citizen would be turned away, regardless of ability to pay. The ministry is made possible through the donations of supporters, as well as client fees.

“Part of our goal is to make counseling available to anyone in need,” Beam said. “We have a lot of hurting, needful people in our community.”

The Samaritan Counseling Center is located at 410 West St. in Bainbridge. For more information, call (229) 243-1633 or visit online at www.samaritancounselingswga.org.

MAKING A TOAST TO LASTING FRIENDSHIP are the five ladies of the Dixie Swim Club: left to right, Hildy Conder,... read more