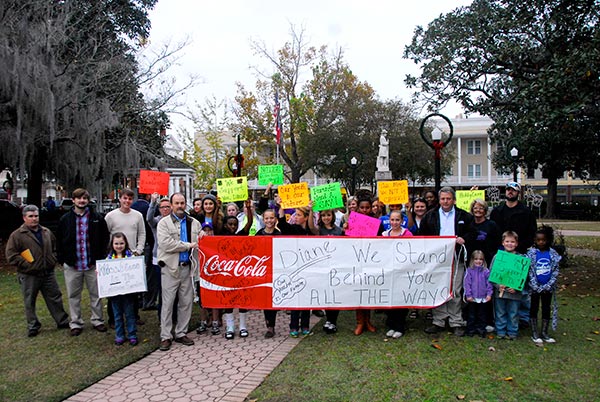 About 30 to 40 people marched from Willis Park to the Potter Street Community Center on Wednesday afternoon, in support of a City of Bainbridge employee.

The marchers held signs and banners showing support for Diane Atkinson, a former Bainbridge Leisure Services employee who was assigned a new position as the city’s special events coordinator on Monday.

The marchers, organized by a Facebook page, were peacefully protesting Atkinson’s transfer. They allege the transfer was unfair and took her away from working with youth sports leagues.

City Manager Chris Hobby, who announced Atkinson’s new role on Monday, termed the personnel move as a positive one that would still allow Atkinson to be visibly involved in community activities.

The protesters swelled in number by a few more by the time they arrived at the community center for a special called meeting of the Bainbridge City Council.

However, Mayor Edward Reynolds informed the group that they would not be able to speak on the matter at Wednesday’s meeting.

The purpose of the meeting, which was scheduled Monday, was for the city manager to inform the council of the status of negotiations between the city and county governments, regarding a Local Option Sales Tax distribution agreement.

Reynolds said the reason none of the protesters could speak was because the council did not put public participation on the agenda for Wednesday’s meeting. Reynolds invited the group to return to the council’s regularly scheduled meeting on Tuesday, Nov. 20, at 6:30 p.m., at the Potter Street Community Center.

The protesters’ leaders indicated that they planned to return on Tuesday to speak in support of Atkinson. They had already gathered signatures for a petition that calls for city officials to name Atkinson as the Leisure Services athletic director — a position that is currently filled.