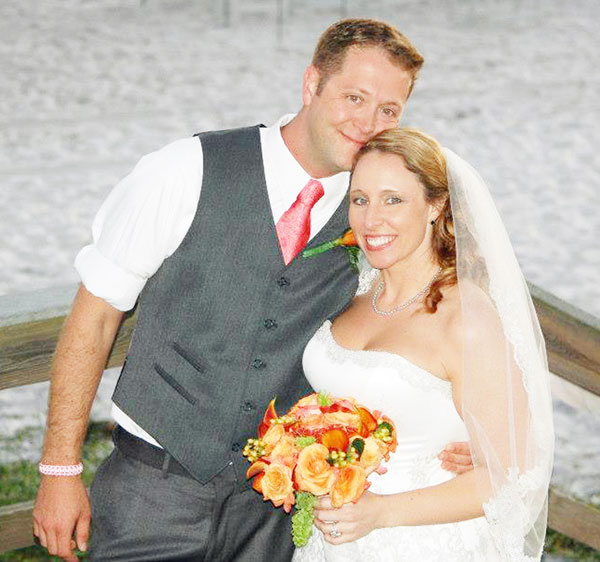 Amanda Suzanne Darley and Wesley Brandon Justmann were united in marriage on Oct. 20, 2012, in a beach wedding in Seacrest Beach, Fla. The officiating minister was the bride’s pastor, Joseph Johnson, of Evergreen Presbyterian Church in Dothan, Ala.

Given in marriage by her father, the bride wore a Maggie Sottero one-piece strapless, slim A-line designer gown with corset closure. The gown featured embellished lace that descended over a satin skirt and accented with a ribbon sash. Amanda’s veil was fingertip length with beaded and lace scalloped edges. She wore her grandmother Darley’s pearls and carried her great-grandmother Eleanor Buntin’s handkerchief in her rose bouquet, along with wearing a handmade blue garter, made by her great-grandmother Lucille Hodges, that was also worn by her mother in Amanda’s parents’ wedding.

Adrian Fessenden, of Atlanta, Ga., was the maid of honor. Bridesmaids were Amanda’s sisters, Rebecca and Stephanie Anne Darley, Allyson Justman, sister of the groom, and India Gatewood. The bridesmaids wore coordinating short chic crinkle chiffon dresses with front cascade chiffon in a coral color and carried bouquets of white roses. Emma Rae Ellison, niece of the bride, served as train bearer and wore a crinkle bubble chiffon dress, also in coral. Announcing the arrival of the bride as page girl was Amanda’s cousin, Lillie Pruitt. She wore a silver dress embellished with 3-D roses. Honorary bridesmaids were cousins of the bride, Ashley Faircloth, Carrie Anderson and Jennifer Voyles.

During the processional, ceremonial torches were lit in loving memory of the mother of the groom, Marsha Justmann; grandfather of the bride, Lamar Darley and cousin of the bride, Joey Maxwell.

Assisting with programs and distribution of the sparklers were Kylee Day and Ella Pruitt, cousin of the bride. The prelude and ceremony music was performed by Annie Rodamaker, cousin of the groom and violinist Carol Wolowsky.

The reception was given by the bride’s families and was held at the Seacrest Beach home of Mr. and Mrs. Felton Woodham. Music was provided by the David Rueve Band of Dothan. Those also assisting with the reception were Suzanne Morgan, Charla Day and John Griffin.

Amanda will receive her Master of Science degree in Occupational Therapy from Alabama State University on Dec. 7. Wesley is enlisted with the U.S. Army and is presently a Warrant Officer 1 Blackhawk Pilot.

After a honeymoon to the Florida Keys, the bride and groom will make their home in Harker Heights, Texas, where the groom is stationed at Fort Hood.