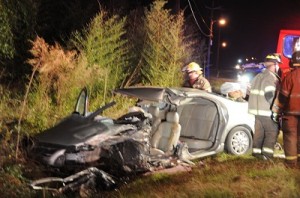 A woman was entrapped and sustained minor injuries after her Chrysler Cirrus was involved in a headon collision on Bethel Road on Thursday evening.

A Bainbridge woman was entrapped and she and five passengers sustained minor injuries Thursday evening, when her car collided with another car near the intersection of Bethel Road and Mayo Drive.
Bainbridge Public Safety Sgt. James Dollar said that Ryan Casey Davis, 28, of Lynn Road, was driving his Dodge Charger east-bound on Bethel Road on Thursday evening. Davis reportedly looked down at the floorboard of his vehicle, and when he looked up again he was traveling in the wrong lane.
His vehicle then reportedly struck the Chrysler Cirrus, driven by Jessica Addison, 23, of Bethel Road, as it was heading west-bound at approximately 6:15 p.m.
According to a BPS accident report, five passengers in the Cirrus were also injured. They were 31-year-old Ester Gibson and four children. All were able to leave the vehicle and transported by Decatur County EMS to Memorial Hospital for treatment and evaluation.
First responders worked to free Addison, and she was transported by ambulance to Memorial Hospital at approximately 6:55 p.m.
BPS Deputy Fire Chief Doyle Welch said Addison’s legs were entrapped under the collapsed dashboard. Rescue crews had to remove both the driver’s-side and driver’s-rear-side doors, as well as the brake pedals.
Welch said Decatur County Fire and Rescue Service also provided assistance.