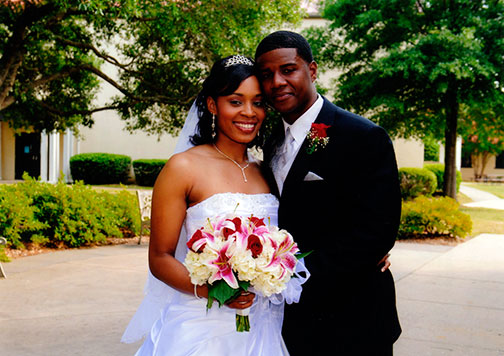 Miss Sha’Ola Stewart became the bride of Captain Eric Jamar Terrell on May 7, 2011 at Maxwell Air Force Base in Montgomery, Ala.

The bride is the daughter of Ms. Sylvia Booker of Moss Point, Miss. Grandparents are Mrs. Ola Mae Stewart and Mrs. Rose Hyde of Mississippi. She is a graduate of Troy State University with a Master’s in Athletic Administration.

The groom is the son of Ret. Sgt. Harold B. Terrell and Mrs. Sherry Parrish Terrell, of Montgomery, Ala. and formerly of Bainbridge. His grandparents are Mr. Coy (Jabo) Parrish and Mrs. Bertha Parrish of Bainbridge, Mr. Michael and Mrs. May Waters of Wetumpka, Ala. and Mr. Harold Terrell of Queens, N.Y. He is a graduate of Troy State University with a Bachelor’s in Criminal Justice.

The wedding was performed by the Rev. Lorenzo L. Heard, uncle of the groom at Chapel One at Maxwell Air Force Base, Montgomery, Ala. The bride was escorted by her brother, Mr. Melvin Booker. Miss Crystal Kennard served as maid of honor, with Mrs. Kandice Zachary as matron of honor. Bridesmaids were Miss Candace Bailey, Miss Jennifer Diaz, Mrs. Chaquita Johnson, Miss Natasha Montgomery, Miss Kristina Villavicencio and Miss Alexis Williams. The flower girls were Miss Jeniah Betts and Miss Sabria Betts.

The couple is residing in Fortson, Ga., while the groom is stationed at Fort Benning, Columbus, Ga.