Young at Heart wishes all ‘a Merry Christmas’ 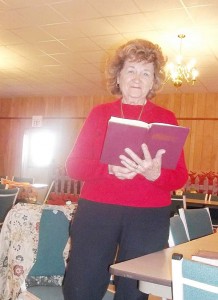 “We wish you a Merry Christmas, we wish you a Merry  Christmas,” echoed around the fellowship Hall at Pine Forest Baptist Church as members of the Young at Heart sent wishes to all as they gathered for the meeting Dec. 1, kicking off the Christmas season in Climax.

President Flora Nell Hughes led group singing of several favorite Christmas carols, after which she brought the devotional reading the Christmas story from Luke. She asked how many ever thought about the angels and the shepherds, and faith they had in what the angels told them and how they departed immediately to find the Christ Child.

As a tribute to Christmases past, and for the entertainment, members took turns sharing memories of Christmas in their childhood. Louise Wilder Williamson remembered the first time she saw Santa Claus. Flora Nell Hughes’ brothers Odell and Elmer Boyett lived with their family just off what is now known as Lake Douglas extension near Climax.

The two young boys somehow got a Santa suit and decided to go around the neighborhood dressed as Santa, to spread cheer and give excitement to the children. In the meantime, Louise and her sister, Anne, very young children, along with their Dad, had been down the road visiting someone.

A picket fence surrounded their home and they walked back home they spied a strange look fellow inside their fence and knew they would have to pass him before they could get into their house. The girls immediately grabbed their Dad and screamed.

“Daddy get your gun and shoot him! Better still get hot water and scald him!” She said they were hysterical and scared to death knowing they would have to go near that thing to get inside their home. The boys had to take the suit off before the Wilder girls would believe them.

Louise said looking back today it was funny that the first time they remember seeing Santa they wanted to kill or badly injure him by shooting him! Tony Williamson questioned his wife in jest; he asked, “Poor old Santa did he ever come back again?” Of course he did — Santa doesn’t scare so easily.

Murry Hughes remembered his neighborhood sharing Christmas with everyone. He said his Mother would invite everyone, of all races of the neighborhood, to come to their home with baked goods. Upon arriving the baked goods were cut into equal slices and then divided by those attending. Everyone took different baked goods back home.

Buryl Harrison remembers calling downstairs in the wee hours of the morning to his Dad asking if Santa had arrived, only to be told firmly “No, go back to sleep!” He also remembered when he found out about Santa and how upset he was. “It just tore me up and spoiled every thing from then on!” he recalled.

Many such memories were shared all in the spirit of the season. Several remembered receiving a lot of fruit and nuts and candy canes, as during World War II this was considered a big gift because they weren’t as available as they are today.

Prayer and get well wishes were sent to the following:

Jerry Harrison is in Thomasville Hospital with a sickness. Irene Jones and Billy Sloan each have a sickness.

Prayers and deepest sympathy are with the family of Roy Bo Mills in their time of grief.

The Pine Forest Young at Heart will discontinue the monthly meetings for the months of January through April, due to conflicting schedules. Meetings will resume in May 2012.

A big “welcome home” is sent to Danny Harrison, who is home from Afghanistan.