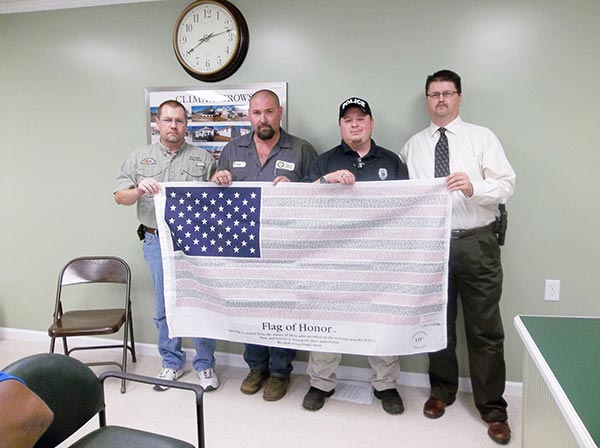 SHOWN ARE CLIMAX VFD representatives Lt. Craig Josey, and Assistant Chief Rick Kelly, and Policemen John Presilla and Chris Jordan. They accepted an Honor Flag with the names of those victims of Sept. 11. The flag was a gift from Ron Kirkland and Woodmen of the World.

There was a full house at the Climax City Hall on Monday, Nov. 14, for the public hearing on the water grant the city recently received. Several questions were answered about what the grant would cover, especially if there would be improvement in the city’s water pressure for customers. The answer was, “yes,” since the main lead pipes are to be the first replaced. Those pipes have been in use since the early 1900s.

Other pipes being replaced will be the old blue poly pipes, which are now breaking and dangerous. Mayor Charles Hadsock also announced that the city was hoping to make it easier to cut off water lines when work has to be done, without cutting the whole city off, as is happening now. Work is to begin on Jan. 1, 2012.

After the close of the public hearing, the Climax City Council opened the regular monthly council meeting, with Hadsock presenting a Honor Flag — with all the Sept. 11 victims’ names inscribed — to the Climax volunteer fire department and police department. The flag was a gift from Ron Kirkland and Woodmen of the World.

After a report from Sandra Thomas on the progress of the fundraiser of candy sales for improvements to the children’s play park, the council heard a complaint from Grace Cooper, against Policeman John Presilla and business owners Ricky and Jeanette Parrish of Parrish’s Detail and Barbeque.

Cooper alleged that the Parrishes had brought false accusations against her, in saying she was traveling on their business property in a dangerous and incorrect way with no regards to those working there. Cooper said the report stated that the Parrishes didn’t want her on the property.

She also alleged that policeman John Presilla was rude and disrespectful when presenting the Parrishes’ complaint to her, and that he had filed a report that was incorrectly documented with wrong dates. She said she was no longer confortable with the police protection now in Climax, and she asked the council to reprimand Presilla for his conduct towards her. She referred to the state code of ethics, and stated that she had seen Presilla in Cairo, Ga., “with a lady in the police car” with him. She also stated that Presilla had blown the car horn at her.

Cooper also said the property in question did not belong to the Parrishes, but instead to Gene Trulock. However, the Parrishes are renting it. Cooper lives just outside the city limits. She read a letter she sent to Jeanette Parrish stating she would seek legal representation if the Parrishes continued to slander her and file false police reports against her.

Ricky and Jeanette Parrish responded to the allegations by saying that they had filed a complaint, due to Cooper cutting corners and traveling on their property when turning on Main Street and Broad Street, and continuing to do so during business hours. Her alleged action, according to the Parrishes, was putting their business in danger of becoming liable if an accident occurred. They also said they had not slandered Cooper or made false statements against her, but they did not want her on the business property during business hours again, due to it becoming a liability.

Presilla responded by showing his report to the council and said he had not been disrespectful to Cooper, and if she felt he had been rude he was sorry. He also said that when Cooper saw him in Cairo, Chief Joel Jenkins was in the car with him picking up uniforms, and that he couldn’t have blown any horn, since the car did not have a horn — only a siren.

The council closed the public meeting and went into an executive session to consider these accusations. After reopening the public meeting, Hadsock announced that more information and evidence was needed — other than one person’s word against another — before any action could be taken by the council. Therefore, the council agreed that action on this matter would be postponed until next month.

The council approved implementing additional part-time policeman Chris Jordan, who is also a full time investigator with Bainbridge Public Safety, to increase police on duty time, along with Presilla. This will allow Climax’s police department to utilize two part-time policemen to work 40-45 hours per week.

The 2012 budget has been submitted to the city accountant, and there will be approval and discussion held at the December meeting.

Maintenance work has been done on the bathrooms at the ball field, and the gazebo in Parker Park has a new paint job, along with work done on the walkway.

The council agreed that the maintenance supervisor and city clerk Greg and Karen Toole will be put on one family insurance plan.

Under the comprehensive plan, set up in 2008 — concerning projects the city planned to do by 2012 — Hadsock announced some items have been accomplished and some are yet to be done.

One item he discussed was the possible annexation of one mile each way into the county for the city limits. Hadsock asked those attending for their opinion. There were mixed feelings, with more in favor than opposing, especially since most are receiving city services already. City Attorney Paul Fryer continues to look into this issue, especially the cost.

Climax Christmas In the Park

Climax’s Christmas celebration in Parker Park will be held Dec. 15 at 6:30 p.m.