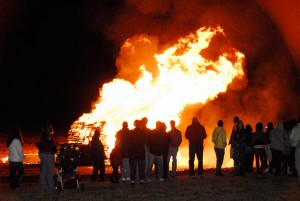 Several hundred Bainbridge High School students, parents and football fans turned out at the high school grounds to root on the Bearcats football team on Thursday night.
BHS varsity cheerleaders, some standing atop a flatbed truck trailer that served as a stage, led the gathered crowd in various cheers. The Bainbridge High School Marching Band, dressed in casual clothes and having fun, performed many of the rousing songs they play during the football games.
BHS cheerleading co-captain Michael Jones fired up the crowd with a microphone before Head Coach Ed Pilcher, starting quarterback Quincy Fortson and senior defensive tackle Shammai Wilburn took the stage.
Pilcher briefly talked about the team’s successful season thus far and asked for the fans’ continued support. Fortson asked fans to say a prayer for the BHS students, staff and everyone making the trip to Waycross, Ga., for Friday night’s game against Ware County.
Wilburn, the team’s defensive leader, got his teammates and the crowd fired up by reciting the energetic chant the football team does in the end zone before their games.
Then the cheerleaders unwrapped the homemade effigy of a gator—Ware County’s mascot—to the crowd’s delight and passed it over to the football players, who carried it down to the huge bonfire that had been lit in a dry drainage pond near the front of the campus. A firefighter took the “gator” and threw it into the bonfire, with the flames burning high into the night sky.
The pep rally wound up with some more cheers and pep music. The event was organized by the BHS cheerleaders and the cheerleading boosters, many of whom are the girls’ parents. Booster Julie Smith thanked the following people for their help in making the bonfire a success: Decatur County Board of Education, School Superintendent Fred Rayfield, BHS Principal Tommie Howell, Decatur County Schools’ Director of Bands Paschal Ward, School Building Maintenance Director Jerry Mills, School Resource Officers, Elberta Crate Factory for donating wooden crates, Bainbridge Public Safety for fire supervision and traffic control, the Georgia Forestry Commission’s Decatur County office, Jones Mobile Homes, Coley Voyles of WMGR-TV 22, Decatur County Fire and Rescue and Decatur County EMS.