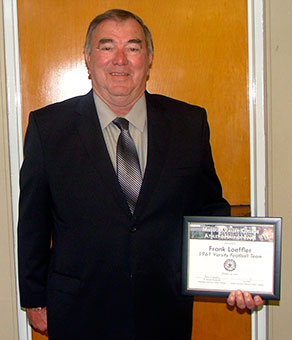 DECATUR COUNTY COMMISSIONER Frank Loeffler holds a plaque which he and his undefeated 1961 Missouri Valley College Vikings football teammates received, in honor of their induction into the school’s sports hall of fame.

At Missouri Valley, Loeffler, a retired transportation director with the Decatur County School System, played under College Football Hall of Fame coach Volney C. Ashford, a graduate of Missouri Valley who coached the Vikings, who were a member of the National Association of Intercollegiate Athletics (NAIA) for 34 years from 1937 to 1971.

From 1941 to 1947, Ashord’s teams won 41 games in a row, which ranks fifth all time for all divisions of college football. Ashford passed away in 1973 and was posthumously inducted into the College Football Hall of Fame in 2009.

His offenses ran from the single-wing formation.

Loeffler pointed out that, while Bowden Wyatt was successful running the single-wing at the University of Tennessee, few schools were running it during his playing days.

“I really couldn’t understand why more teams didn’t run the single-wing,” Loeffler said. “There was a lot of spinning and faking involved in it and it was very successful.

Loeffler and his wife, Susie,  a teacher at Grace Christian Academy who he met at Missouri Valley State, have two sons, Mark, a former Bainbridge High School Bearcats quarterback and successful attorney, and Brent, a former Bearcats linebacker and baseball player and former Decatur County Deputy Sheriff, who lives in Bainbridge and is now with the Georgia Sheriffs Association.

He helped develop the youth CHAMPS program for the association. CHAMPS stands for Choosing Healthy Activities and Methods Promoting Safety.

Loeffler played his high school football  under coach Ted Chitwood at Raytown High School, which was in a suberb of Kansas City. Mo.

“Coach Chitwood had a very strong high school program and they would not let us in the Suburban Conference,” Loeffler recalled. “Consequently we had an opportunity to go on some road trips and play some excellent teams.”

“I just spent less than a year with the Bills,” he said. “But you might remember two of my teammates, former Notre Dame quarterback Daryle Lamonica and fullback Cookie Gilchrist.”