Relay kicks off with ‘colorful’ night 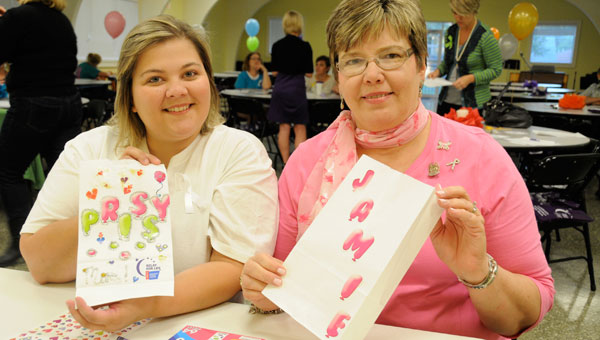 ASHLEY WHITTAKER, left, and Sharon Day show off the personalized “Luminaria” candle holders they made Monday, in honor of their loved ones who have passed away from cancer. | Justin Schuver

Most people know that pink ribbons represent breast cancer victims, but they may not know that there are many other colors that symbolize many other types of cancer.
The theme for the 2012 Decatur County Relay For Life is “Colors of Cancer,” and the campaign officially kicked off Monday at a meeting at the First Presbyterian Church of Bainbridge. Relay For Life is an annual fund-raising and educational campaign that strives to raise money for cancer research and increase public awareness about the disease.
The Relay itself will be Friday, April 20, 2012, starting at 6 p.m. at the Bainbridge Middle School track, and continue until 6 a.m. Saturday, April 21, 2012. In the 2011 Relay, Decatur County raised $59,642 and had 37 teams participating.
Monday, meeting attendants were handed different colored ribbons, each of which represents a different kind of cancer. For example, an orange ribbon represents leukemia, a lime ribbon represents lymphoma and a peach ribbon represents uterine cancer. The plan is for each of the 30 colors to be represented by at least one booth, at the April 2012 Relay event.
“You can see why this theme was picked this year,” said Chealsea Austin, the American Cancer Society staff partner for the 2012 Relay. “Cancer has many types and it touches many hearts.
“So many people don’t realize that there are so many varities of cancer — everyone knows pink. We don’t want to forget or downplay breast cancer, but we also want to educate about the other varieties that maybe people don’t know as much about.”
Later in the meeting, every person was given a brightly-colored glow stick and the lights were turned out in the room. First, those who were survivors were asked to stand with their glow stick; next, those who knew someone with cancer were asked to stand; then, those who knew someone who had died from cancer; and so on. Eventually, every person in the room was standing with the glow sticks held high.
“This is why we do what we do each year,” said Beverly Shirley, the 2012 Decatur County Relay For Life chairperson. “This is why we ‘Relay.’”
For more information about the 2012 Relay, contact Austin at (229) 446-1073, or email chealsea.austin@cancer.org.