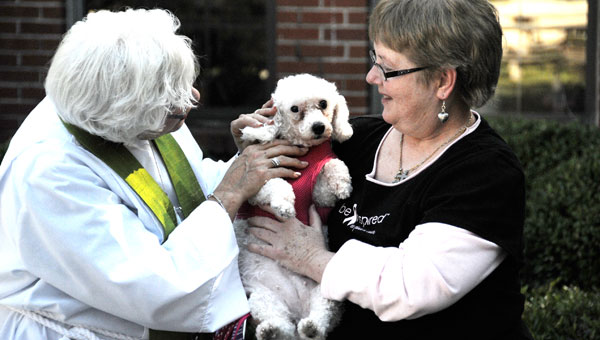 THE REV. JUNE JOHNSON, interim rector of St. John’s Episcopal Church, gives a special blessing to “Judy Bug,” held by Alta Holton, at Sunday’s “Blessing of the Animals” at the church. | Justin Schuver

Sunday, a crowd of animals led to many exclamations of “God bless you,” but it wasn’t because anyone at St. John’s Episcopal Church was allergic.
The Bainbridge church held its annual “Blessing of the Animals” ceremony Sunday afternoon, as interim rector Rev. June Johnson and deacon Rev. Scott Mithen prayed for the well-being of approximately a dozen furry friends, including cats and dogs and even a rabbit.
Johnson explained that the ceremony is based off the life of St. Francis of Assisi, who is considered the patron saint of animals.
“This is one of my favorite things that our church does all year,” she said. “The Bible gives us stewardship over animals and plants. We are to care for them and treat them as creatures of God.
“In our arrogance, we often forget the love we are supposed to show to our animal friends.”
Each of the animal owners had a special story for their pet. Many found the creatures as strays or in poor health, and had helped to nurture them back to a fulfilling life.
Beverly Widener said she found her dog, “Zoom-Zoom,” in rainy weather outside a house and weighing just 4.5 pounds.
“The dog’s closer to 13 pounds now and is a bundle of energy,” Widener said.
Jean Brock held her cat, Squirt, to get a special blessing from Johnson and Mithen, and told how the feline got its name.
“My husband was outside fixing sprinklers one day and there was this little cat there,” she said. “Squirt was the perfect name.”
Johnson and Mithen led the ceremony with several prayers, including one for pets who had died, and also several readings from Scripture that reference animals — Genesis 9:8-17, Psalms 104:1, 10-15, 25, and Romans: 18-25.
At the end of the ceremony, each animal was brought to be sprinkled with holy water and blessed with the words of “Bless, O God, this Your creature, and all who are involved in his/her protection.”
Johnson said the ceremony is special to her, because she and her husband are “wholly owned” by four cats of their own.
“What a treat it is, to have a little piece of God’s love — on four legs,” she said.