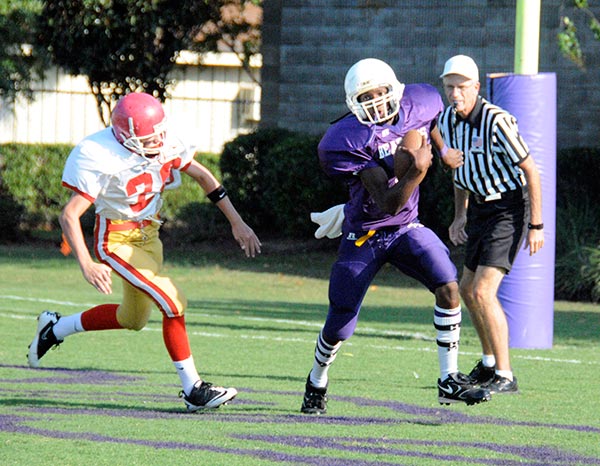 Photo by Justin Schuver BAINBRIDGE QUARTERBACK Tyree Crump not only broke away from this tackle in the endzone, but kept running for a 99-yard touchdown run in the Bearcats’ win Thursday over McIntyre Park Middle School.

Quarterback Tyree Crump ran for one touchdown and threw for another Thursday to lead the Bainbridge Middle School eighth grade football team to an 18-0 victory over Thomasville’s McIntyre Park Middle School.

Crump brought the crowd to its feet when he ran 99 yards for a touchdown with 1:18 left in the first quarter. The Bearcats defense had stopped the McIntyre Park Bulldogs’ drive at the 1-yard-line a play earlier.

Crump took the snap, sprinted out to the left, cut back to the right, and raced all the way to the end zone. BMS’ Elijah Tyler was stopped short as he tried to run in for the two- point conversion.

The Bearcats, who are 2-1 for the season, increased their lead to 12-0 when Crump threw a 10-yard touchdown pass to Tyler with 4:26 remaining in the second quarter. BMS’ Elsimar Williams tried to run in for the two-point conversion but was stopped just short.

The Bearcats added a late defensive touchdown to seal the victory. Outside linebacker Curtis Keaton picked up an errant Bulldogs punt snap and returned it 30 yards for a touchdown. He crossed the goal line with just 5.7 seconds left in the game.

BMS’ Lorenzo Mitchell tried to run in for the two-point conversion but was stopped just short.

The eighth grade Bearcats will return to action Wednesday, October 5 when they travel to Cairo for a 5 p.m. game with the Washington Middle School eighth grade Tigers at Cairo High School’s West Thomas Stadium.

The game was originally scheduled for Thursday, October 6.