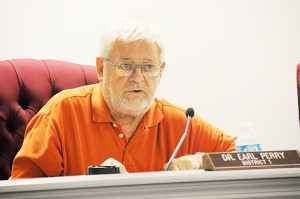 Based on responses during Tuesday’s meeting of the Decatur County Board of Commissioners, it appears that most of the commissioners are in favor of eliminating the county treasurer position.

However, both Maxwell and Decatur County commissioners have previously said there is a possibility the position may be eliminated before that March 6, 2012, election. Only three counties in Georgia still have a county treasurer position; Decatur County has both an elected county treasurer and an appointed finance director, Carl Rowland.

Any change to the county treasurer position would have to be first approved by both the Decatur County Board of Commissioners and the Georgia General Assembly.

On Wednesday, Commissioner Earl Perry brought up the issue near the end of Tuesday’s meeting.

“I think this would be a good time to [consider eliminating the treasurer position],” Perry said. “I would like to urge that we not let this opportunity slip by. Let’s address this matter soon, so we can get legislation together, if we six [commissioners] can agree on doing away with this position.

“Let’s get the legislation before our state senator and state representative, so it can be introduced for action by the state General Assembly when they convene in January.”

“We have auditors that audit our auditors,” Smith said. “I don’t think we need the country treasurer position, since we have a county finance director. I think we should move forward with deleting that position.”

Chairman David C. “Butch” Mosely did not offer his opinion on the issue, but he did say that it is likely the board may be able to act on it, at their next meeting Tuesday, Oct. 11, at 9 a.m.

“We can be prepared to deal with this at our next meeting,” Mosely said.

Commissioner Oliver Sellers was the only one who spoke out against eliminating the position, although he also said he has not definitively made up his mind.

“I’m not sure that I agree with y’all on doing away with it,” he said. “I’ll think about it. Right now, I feel the other way, but that’s OK. We’ll talk about it.”

When Maxwell was appointed Wednesday, Sept. 14, he said that he understood the position might later be eliminated.

“If the county and state officials decide that the office is outdated, then I would cooperate and work with the appropriate officials to abolish the office,” he said.