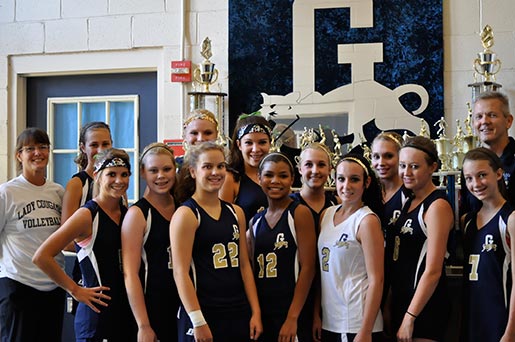 The Lady Cougars, who have a 3-2 season record, bounced back to defeat the Enterprise Alaabama Prep Academy Lady Patriots, 3-1, on the road.

“We got a warm welcome in our first GISA match against Calvary, the defending state champions,” Harrell said. “They returned McKenzie Bragg and Leslie Dupree, two All-State players.

“We proved we can compete, and now we must continue to practice and prepare for the next match no matter who it is against.”

Against Calvary, Kelsey Harrell had four kills and Leah Smith had three. Emma Heard had seven assists and five digs, Smith had three ace serves and Christy Colvin had a 100-percent serve percentage.

Against Enterprise, Colvin had 10 kills and Smith finished with nine kills. Merrianna Parker had 12 assists and Emma Heard added seven, while Kendi Castoro led defensively with six digs. Leah Smith had six ace serves, while Melissa Mills and Colvin each had five. Harrell finished with an 80-percent serve percentage.