On senior day Tuesday at the Lady Cats Diamond, they shut out the Americus-Sumter High School Lady Panthers 12-0 with an all-senior lineup.

They followed that victory up with a 16-11  victory over the Early County Lady Bobcats on Wednesday in Blakely.

On Thursday, the Lady Cats dropped a 7-0 decision to the Lee County Lady Trojans in a Region 1-AAAA game in Leesburg.

On Tuesday, the Lady Cats scored two runs in the first inning and two more in the second on the way to their victory over Americus- Sumter. Third baseman Diamond Bouie opened the first with a bunt single and moved up when shortstop Briana Wade reached on a fielder’s choice. Both runners came in on a double by pitcher Avis Jackson.

Khadeeijah Cooper singled and was aboard when Diamond Bouie homered in the second.

Catcher Kristen Bennett led off with a home run in the third. 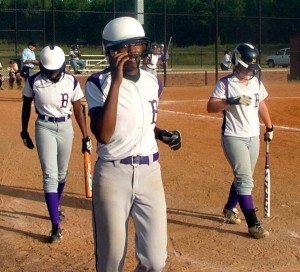 The Lady Cats’ big scoring inning in their Wednesday win over Early County was the sixth, when they rallied for five runs. Key blows in the inning were two-run singles by first baseman Lindsey Griner and left fielder Anna Barber.

Thursday against Lee County, shortstop Briana Wade tripled with one out in the first, but was stranded. 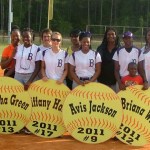 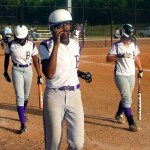 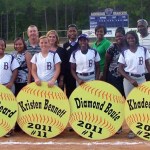 FOUR OF THE EIGHT Bainbridge High School softball players honored Tuesday on senior day get together with their families. From left, Jocelyn Beard and her parents Daniel and Josette Beard, Kristen Bennett and her parents Chad and Jan Bennett, Diamond Alexandria Bouie, her brother Justin Johnson and her mother Gondia Bouie and Khadeeijah Cooper and her parents Grace and Greg Cooper.