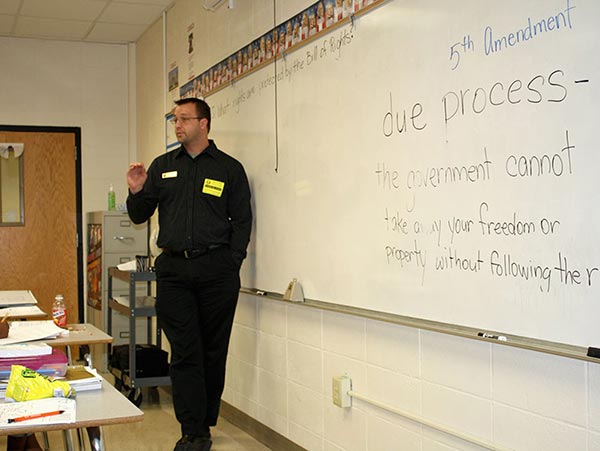 By MARCIA McRAE
BC Communications Director

Sellars was invited to speak to Melissa Brock’s fifth grade social studies class, after Brock learned from Sellars’ son, Alex, that his dad had “made an amendment to an amendment” concerning the 2011 Georgia HOPE legislation, which was later signed into law by Gov. Nathan Deal.

With the changes that Sellars suggested, the amended version preserved the Georgia HOPE legislation for future students and for potential students who enlist in the military in this state.

During his visit to HMS, Sellars described to the students how a bill becomes a law, and he used the opportunity to emphasize the importance of high grades and an individual’s accepting civic responsibilities, such as voting and political involvement. He emphasized to the students that right now they are laying the groundwork for their performances in high school, which will determine if they become HOPE Scholar students after graduation or even possibly “Zell Miller” scholars.

As he discussed how a bill becomes a law and the significance of personal civic responsibility, Sellars noted that he had identified a potential conflict of law regarding future military members and the proposed HOPE legislative changes. Having identified that potential conflict, which created a violation of the federal Soldiers Civil Relief Act (SCRA), Sellars started contacting people throughout Georgia about his concerns and his recommended changes.

At home on his personal time, he sent more than 400 emails, made numerous phone calls to State House and Senate offices, used Facebook, and contacted the Georgia Student Finance Commission and the Governor’s Office.

The solution to the problem that Sellars provided included adding the phrase “or the home of record” into the Senate version of the law, because the House had passed a version that left this out, thus creating a violation of the SCRA, which allows an active duty soldier to maintain his or her home of record in the state of his or her enlistment as the home of legal residence if he or she is serving in another state because of federal service requirements.

By restricting service members through the residency requirements, the House version would have denied this right unintentionally, and the affected service members would have been restricted from receiving HOPE Education Benefits after they were stationed in another state.

The Senate version, which incorporated Sellars’ recommendation and was signed into law by Gov. Deal, also added a military service extension to the new seven-year rule, making it a very military friendly law that recognizes the sacrifices of our veterans.

As he concluded his presentation to the HMS fifth graders, Sellars reinforced the importance of high marks in education and the importance of recognizing the civic power of that “one voice that lives within each of us.” He added, “that one voice is all that is needed to get the ball rolling to generate important changes in government and our society.”

Softball clinic to be held

Bill Reynolds Sports Park will play host to a girls softball clinic on Saturday, Oct. 1, for ages 8-14. The... read more