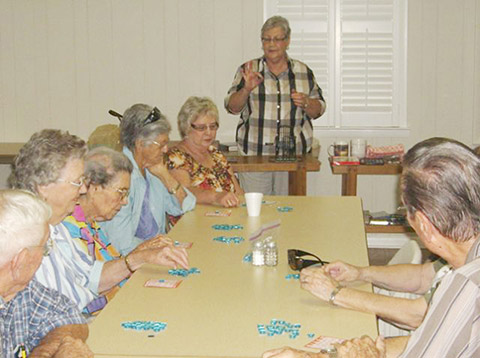 The fourth meeting of the Climax Golden Agers was held at the Climax United Methodist Church on Sept. 14, with everyone enjoying several games of bingo.

The winners, Belle Dennard, Marguerite Plitnick, Ruth Betts, Dianne Gibson and Phillip Dodson, had their choice from a table full of bountiful goodies — from trinkets to Sandra Sirmons’ homemade treats.

Before the games of bingo, President Rita Dodson welcomed all and called the meeting to order.

Bonnie Maloy asked to remember the following in prayer due to sickness or other concerns: The Turner family of Grady County, Billy and Marguerite Sloan, Brittany Singleton and daughter, Rita Dodson Mother and family, Jack Wingate, Ricky Cooper, Marigean Boyd, the family of Ricky Helms during their grief, Lee and Pearle Hamilton, Martha Harrison, Gene Phillips and Evelyn Hutchins.

Woodmen of the World will sponsor a fish fry for the October meeting and callers will be contacting members for a head count. The meeting and fish fry will be held at the Climax United Methodist Church on Oct. 13, which is a Thursday instead of the regular Wednesday.

November will be Swine Time, and the Golden Agers Pilau is Friday night before Swine Time. Tickets will be available at the door for $6. A list was provided of those who will have duties at the pilau. If club members do not have their assignments, they can still find out next month.

Following the pilau on Friday night after Thanksgiving is the Golden-Agers-sponsored Climax Grand Ole Opry beginning at 7:30 p.m. Sam and Sandra Sirmons are responsible for the Opry.

Also in November, the club members are asked to bring canned goods, which will be donated to those in need of food.

The banquet committee for December is Dianne Gibson, Bonnie Maloy and Doris Hobbs. Members are asked to bring an unwrapped Christmas gift for a child in December.

The club agreed to purchase another sign for use in the Swine Time parade and other parades, and Marlene Free offered a convertible for the parade.

Sandra Sirmons gave a short devotional before playing bingo, reading from The Guide Post lesson for Sunday Sept. 11, with the Scripture from Ezekiel 33-11. “I have no pleasure in the death of the wicked, but that the wicked turn from his way and live,” the Scripture said. She continued reading from the memories of that day when many lost their lives to the wicked actions of the terrorists.

After prayer by Sam Sirmons, a delicious luncheon was served.