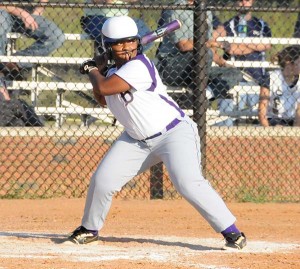 OCELYN BEARD, shown at the plate in a game against Early County, is one of the seniors who will be honored at Tuesday’s “Senior Night.”

Lee County’s Erin Callaway was the winning pitcher in the varsity game.

The junior varsity Lady Cats put their victory over Central away with a five-run, fifth-inning rally.

Right fielder Malasia Taylor ignited the winning rally with a one-out double. She stole second and came home on a fielder’s choice. Also scoring for the Lady Cats in the decisive fifth inning were left fielder Jordan Graham, who singled, third baseman Lindsey Griner, who was hit by a pitch, winning pitcher Kaitlyn Dunlap, who walked, and shortstop Shea Williams, who walked.

This Tuesday, Sept. 20, when the Lady Cats host Americus-Sumter County, it will be senior night. Seniors and their families will be honored. Seniors are Kristen Benett, Diamond Bouie, Khadijah Cooper, Tiffany Hand, Avis Jackson, Briana Wade, Natasha Green and Jocelyn Beard. Seniors will be honored in pregame ceremonies, and the game will begin at 5:45 p.m.

Kaitlyn Dunlap ignited the rally with a one-out double. She came home on a one-out single by Megan Vaughn. Vaughn stole second and scored on a two-out single by Summer Kirkland.

The junior varsity Lady Trojans scored their run in the fifth inning on a single, an error and a fielder’s choice to cut the Lady Cats’ lead to 2-1.

The junior varsity Lady Cats scored their final run in the bottom of the sixth. Shea Williams opened the inning with a double, moved up to second when Megan Vaughn grounded out from short to first, and came in on a single by Summer Kirkland.