Former ‘voice of the Bearcats’ dies 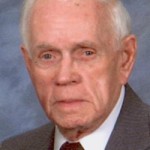 Joe Hill, the long-time radio voice of Bainbridge High School Bearcats football and basketball games passed away Wednesday at the age of 84.

Bill Searcy, Wayne Shiver and Charles “Rebel” Owens, who worked closely with him as football game color analysts, shared their memories of him on Thursday.

Hill was a World War II Navy veteran. He served two years on the submarine U.S.S. Proteus in the North Atlantic.

“I had worked with radio stations in Chattahoochee and Donalsonville, but Joe brought me home to work with him at WAZA Radio in 1965,” Searcy recalled. “I worked with him there until 1967.

“Later I worked 16 years with him at WMGR Radio. Bainbridge has never had a more professional sports announcer than Joe Hill.

“When I came to Bainbridge to work with him, my late mother Sara was so happy. She told me that I would be working with one of the finest men in Bainbridge and Decatur County. I soon found that to be very true.”

Shiver also had many fond memories of working with Hill as color analyst during WMGR Bearcat football radio broadcasts.

“The one thing I remember most about working with Joe Hill was his rock solid support of the Bainbridge High School Bearcats and University of Georgia Bulldogs,” Shiver said. “If you criticized either one you would be in for an argument.”

“We beat the Gainesville High School Red Elephants 7-6 on a rainy and cold night in Gainesville to win the state championship in 1982,” Shiver recalled.

“I remember how warm and cozy Joe and I were in the booth and how miserable everyone else was in the stands and on the field.”

Shiver recalled another memory with Hill during the Bearcats’ 1982 eason.

“In the first round of the state playoffs in 1982, we beat the Americus High School Panthers 21-14 in overtime and a heavy fog rolled in over the Americus field late in the game,”Shiver recalled.

”We did not know that our telephone loop had gone out. Joe did a great description of the end of the game and recapped the victory.

“After the game, we called into the station excitedly and asked them how we did. They said they were sure we did great but our end of the game call was unfortunately not heard because of the loss of the radio loop.”

“I also remember the days when we taped the Friday night games and played them back Saturday morning,” Shiver said. “One year there was a malfunction with the recorder and the second half of the game was completely dropped out.

“It did not phase Joe. He reviewed his notes from the game and what was written in the paper about it and recreated the second half on tape.”

“Joe was the best when it came to play-by-play football announcing,” Owens said. ”You could really follow the game with him.”

Hill worked in advertising sales with The Post-Searchlight, late in his career.