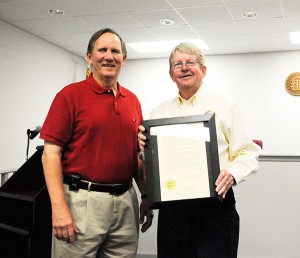 Dr. Sydney Cochran likes to describe himself as a “poor old country doctor.” But this “poor old country doctor” recently received quite a tremendous honor — he was named one of just 10 “Hospital Heroes” in the state of Georgia. The award is given each year by the Georgia Hospital Association (GHA), and Cochran is the first person from Bainbridge to earn the distinction.

Cochran, an internal medicine specialist at Memorial Hospital and Manor in Bainbridge, was also honored at Tuesday’s meeting of the Decatur County Board of Commissioners. He was presented with a proclamation and that Tuesday was proclaimed as “Sydney Cochran Day” in Decatur County.

“We’re awful proud of him,” Board Chairman Dr. David C. “Butch” Mosely said, before he read the proclamation Tuesday, at a well-attended meeting attended by more than 20 employees from the hospital and Cochran’s office.

Cochran said he was humbled by the proclamation, but it is not the only award he will receive as a result of the honor. He will also receive the GHA’s “Hospital Hero” award at the state luncheon in Atlanta in December.

“I thank the Lord for giving me the ability to do what I try to do,” he said. “I have a good wife who has supported me through the years, and a good office staff who has helped me. But most importantly, I thank those patients who have chosen me to be their doctor.

“I’ve been blessed with a passion for medicine, and the community has been mighty good to me, and I thank you all.”

Cochran served as a member of the Hospital Authority of Decatur County and Bainbridge for nine years, and has served as the chairman of the Decatur County Board of Education for more than 12 years. He graduated from Georgia Tech with a bachelor’s degree in civil engineering before joining the U.S. Army for a two-year tour that included duty in Vietnam in 1970.

He earned a doctor of medicine degree from the Medical College of Georgia in Augusta, and completed a residency in internal medicine at Memorial Medical Center in Savannah before moving back to Bainbridge in 1979. He and his wife, Carol, have four children.

Cochran was nominated by the staff of Memorial Hospital and Manor, who cited the doctor’s trustworthiness and kindness.

“There is something reassuring about hearing the whistled tune of ‘How Great Thou Art’ echoing through the halls of Memorial Hospital and Manor in Bainbridge, Georgia,” an excerpt of Cochran’s nomination reads. “Everyone knows what that means — Sydney Cochran, M.D., is in the house. This reassurance comes from the trust, respect and confidence that everyone has for this self-proclaimed ‘poor old country doctor.’

“If the definition of a ‘poor old country doctor’ is a physician who cares more for the well-being of his patients than for making money, who works tirelessly to help wherever he is needed, and who sacrifices his own leisure time to make a difference in the lives of people in his community, then Dr. Sydney Cochran fits the bill.”