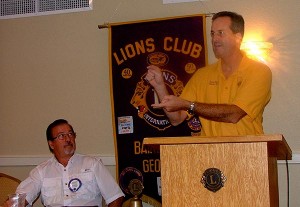 “When you have a little 8-year-old girl and her grandparents come up to you, thank you for the glasses you provided for her and tell you she is now able to keep up with her class, it makes you proud to be a Lion,” he said.

“There is a new $3 million Atlanta facility, called the Georgia Lions Lighthouse For the Blind, which provides eye surgeries,” he said. “Then there is the Lions Clubs International Foundation (LCIF), which provides disaster relief to victims around the country and the world. After the severe flood damage in Albany and Newton, LCIF was there to help.”

Black concluded his comments by telling two stories about how doing the right thing is always the path to take.

“Al Capone, the gangster who was involved in all kinds of organized crime in Chicago in the late 1930’s and early 1940’s, had a lawyer named Easy Eddie,” he began. “He got Al Capone out of a lot of scrapes. He also had a son who had the best clothes, the best cars, and was really living well.

“One day Easy Eddie decided to go to the Chicago police and tell them all he knew about Al Capone. Later he was shot to death in front of his Chicago home.

“Some years later, following the bombing of Pearl Harbor which got us into World War II, a lieutenant and pilot named Butch O’Hare personally shot down five Japanese planes before being shot down and killed himself.