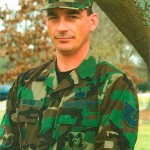 In a contest on who the biggest fan of BikeFest would be, Jeff Mathis would definitely have to be in the top 10 finalists —  and probably the winner — hands down.

Mathis is so dedicated to BikeFest that he delayed his return from Afghanistan for two months after he was scheduled to come home, just so he would not miss the event.

Mathis is currently working as a civilian contractor in Afghanistan and has been there since April 2010. His first R&R was scheduled for July, but when he realized he would miss BikeFest he delayed it until September, just so he could attend.

Jeff has served 23 years in the U.S. Air Force, in the Aerial Port-mobility flight division, which took him all over the world, traveling to every continent except Australia. He served in Desert Shield/Desert Storm as well as many other overseas tours.

He has been stationed in California, Japan, South Carolina, New Jersey and Georgia before retiring from Moody Air Force Base in 2003.

He will spend 21 days at home before being deployed back to Afghanistan. He will be enjoying his friends and family, and attending the Bainbridge BikeFest with his friends from Valdosta. He is a proud owner of a Harley Dyna Glide, which he enjoys riding in poker runs and attending bike rallies.

It seems nothing, not even wars, can keep BikeFest fans like Jeff Mathis away.