Patton: Concrete program has been used for long time 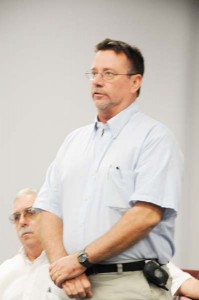 Crushed concrete might seem like a dry subject, but it was the source of often-heated debate Wednesday at a special called meeting of the Decatur County Board of Commissioners.

Board Chairman and District 2 Commissioner Dr. David C. “Butch” Mosely said he called the meeting because he wanted commissioners to ask questions about the county’s often-controversial program of using crushed concrete to improve dirt roads. The controversy arises from the fact that county-owned equipment sometimes goes onto private property to remove concrete slab, at taxpayer expense.

The program proved particularly controversial at the end of August, when several citizens reportedly called commissioners to complain about work being done at the “Old Peanut Warehouse” property at the corner of Albany and Back streets. The property is owned by Joe Frank Battles, and county vehicles were witnessed removing concrete from the demolished structure on the property.

“I know I have gotten lots of calls about this,” Mosely said.

County Roads Superintendent Dennis Medley told the board that Battles had approached him and asked if the county could remove the structure. The county would then be able to use the old concrete and break it down into fine dust, which could be used on roads.

Medley said it cost only $7.30 per ton to crush the concrete, and it would cost $22 per ton to purchase similar concrete-dust from a private company. He acknowledged that the $7.30 estimate did not include labor and transportation costs, but he still said the difference is great enough that the county sees significant savings from the program. 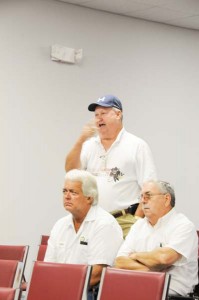 Former Roads Superintendent Billy Leverette was in attendance and defended the program.

“This situation has been done many times before and it is not illegal,” he said, his voice getting louder on occasion. “They have a responsibility to spend taxpayers’ money wisely.”

County Administrator Tom Patton also agreed that the program had been in place for at least “15 years.”

District 6 Commissioner Oliver Sellers said he had major issues with the idea of county equipment and labor cleaning up privately-owned property.

“I don’t care if there was gold on that land, there is no reason for our county people to be there,” he said.

Sellers also said that concrete dust is useless on roads, and actually creates broken windshields and chipped paint when it is kicked up. District 5 Commissioner Russell Smith interjected and said he knows of several roads that have the concrete dust and they have held up well.

DISTRICT 6 COMMISSIONER Oliver Sellers said he did not agree with the program, and also felt the concrete dust mix was unsuitable for roads.

Mosley asked if there was any written policy detailing when the program is used, noting that it would not be cost effective to only gain a little bit of concrete. Medley said the limit is “at least 150 tons,” but Mosley said that the policy needed to be put in writing. He also said he would like to be notified of any other times county equipment is used on privately-owned property.

“When we have a piece of equipment right in the middle of Bainbridge, I would have preferred a phone call to at least know why it’s there,” he said.

Commissioners agreed to ask Patton and County Attorney Brown Moseley to work together to draft a written policy to put rules in place for the program.

“It would be nice to at least have something we can reference, the next time we start getting phone calls like this,” District 6 Commissioner Frank Loeffler said.

In a related issue, commissioners asked if there had been any action taken since an incident at the Battles-owned property. On Monday night, a Bainbridge man fell into a hole that had been dug on the property, and no safety barriers were in place to prevent the accident.

Medley said the employee had been reprimanded and was suspended three days without pay.