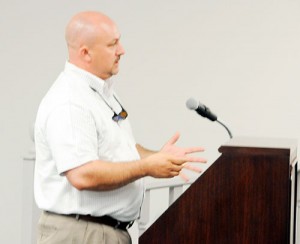 ENGINEER STACY G. WATKINS, with Watkins & Associates of Tifton, gives a wastewater plant status report to the Decatur County Board of Commissioners on Wednesday.

The Decatur County Board of Commissioners learned more Wednesday about the needed upgrades and improvements at the Airport Industrial Park’s water and waste water system.

At their regular meeting Tues., Aug. 23, the board approved spending approximately $2.87 million on the project, with $1.67 million coming from a federal grant. The improvements are necessary because the Georgia Environmental Protection Division (EPD) issued a consent order in April that orders the county to fix the problems with river pollution and old equipment.

At a special called meeting Wednesday, Stacy G. Watkins, an engineer with Watkins & Associates LLC of Tifton, detailed the steps that would need to be taken.

“We’ve looked at several different options, and have determined this is the most cost-effective way to solve the problem,” he said.

Immediate actions that need to be taken include the installation of a filter in the equalization basin, the removal of solids that have built up in the system, the replacing of existing valves at both reactors and the installation of a temporary “baffle wall” within the equalization filter. A baffle wall is a barrier that lengthens the path the fluids must travel, increasing treatment time and allowing additional particles to separate out.

Watkins said these immediate actions can be completed in as little as four months.

“Most of the equipment in this facility was installed in 1982, and some of it was first put in back in 1942 when the air base was first built,” he said. “This equipment has served its purpose and needs to be replaced.

“The equipment that we are putting in … you will be able to see a siginificant improvement right away.”

Watkins said that the equipment is from the Aquarobic International Company of Ferrum, Va., and will be similar to the equipment being installed at the facility in Donalsonville.

He added that more improvements and replacements will be necessary, but the project can be completed in phases. However, he also noted that the Economic Development Administration, which is providing the federal grant, requires for all work on the project to be completed within a two-year window.

Board Chairman Dr. David C. “Butch” Mosely thanked Watkins for his due diligence with the project.

“It appears to me that this is the most appropriate action to take, considering the limitations that we have with money and time,” he said.