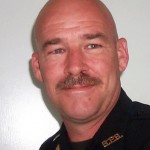 Marty Brown, one of four assistant fire chiefs at Bainbridge Public Safety, was arrested for driving under the influence of alcohol on Tuesday morning, according to arrest logs and an incident report.

Brown had backed out of his driveway and struck another vehicle that was passing by, according to an incident reported filed by Trooper First Class David Fretwell of the GSP’s Colquitt Post.

BPS notified the State Patrol and when Fretwell arrived, he was met on the scene by Major Walter Landrum, patrol commander at Public Safety. Landrum advised Trooper Fretwell that he suspected alcohol was involved with the crash.

Brown, who was off-duty, told the trooper he had been drinking, which led the trooper to conduct roadside sobriety tests and eventually place him under arrest.

While conducting an inventory on Brown’s Jeep Grand Cherokee, Trooper Fretwell found a 12-ounce beer can in the vehicle’s center console which was still cold to the touch. Brown was transported to BPS headquarters. An Intoxilyzer breath test indicated Brown’s blood alcohol content to be .126, over the legal limit of .08.

In addition to the DUI charge, Brown was also charged with misdemeanor reckless conduct and improper backing.

Brown has been a Public Safety officer since 1990, with only a brief hiatus during that time. He was promoted to assistant fire chief in 1993.

In 2002, Brown received the Veterans of Foreign Wars National Firefighter-of-the-Year Award for saving three lives in 2001. He rescued two men from two separate burning structures and resuscitated a child who nearly drowned in a bathtub. He was also named Georgia Firefighter of the Year in 2001 and was the City of Bainbridge’s Employee of the Year.

He is also a certified medical first responder and before working at BPS, worked for Decatur County Fire and Rescue for five years.