The Decatur County Board of Commissioners said Tuesday they would try to help a church, whose campus property was allegedly damaged after road work was incorrectly done.

Troy Walker, a church elder at New Life Deliverance Ministries, at 115 Lynwood Drive, spoke at Tuesday’s board meeting, along with the pastor of the church, the Rev. Jacqueline Porter. Walker and Porter initially discussed the issue at a May 24 board meeting. They contend that road paving in the Dollar Subdivision in 2004 was done incorrectly, and that soil has eroded away to create a ditch in front of the church. 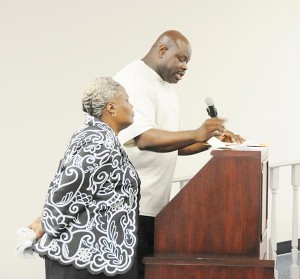 ELDER TROY WALKER and the Rev. Jacqueline Porter, of New Life Deliverance Ministries, discuss their church’s erosion problems at Tuesday’s meeting of the Decatur County Board of Commissioners.

“Something needs to be done, because someone messed up,” Porter said. “Our property is eroding and it has not had that problem before.”

Walker also said the church property initially had two driveways, but after the road project was completed, only one driveway was left. Both contended the shoddily-done work had also led to a number of sinkholes, and was causing a potentially life-threatening situation for the parishioners.

Walker said he had received a letter from Board Vice Chairman Dr. C. T. Stafford, and that the letter stated the church would have to pay for most of the $5,000 cost of fixing the problem. Stafford said Tuesday the county could not afford to fix the erosion issue, and that the statute of limitations had expired, since the project was “closed” and the work was completed in 2004.

Porter raised her voice in response.

“Apparently you don’t plan to do what is right,” she said. “I promise you we will consult with legal representation.” 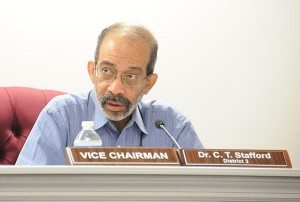 BOARD VICE CHAIRMAN C. T. STAFFORD said Tuesday that the church would likely need to pay for the improvements to its property. However, other commissioners contended that the county is likely liable.

Board Chairman Dr. David “Butch” Mosely interjected that a legal battle would not be necessary.

County Attorney Brown Moseley added that the county — or its contractor — was likely responsible for the damage.

“If our road work caused the problem, then this is our liability,” he said.

Commissioners agreed to ask County Administrator Tom Patton and Roads Superintendent Dennis Medley to work on a solution to the problem.

“Let’s not let this get any uglier than it’s already gotten,” Chairman Mosely said.

Complaints of unfair hiring are hurting our school kids