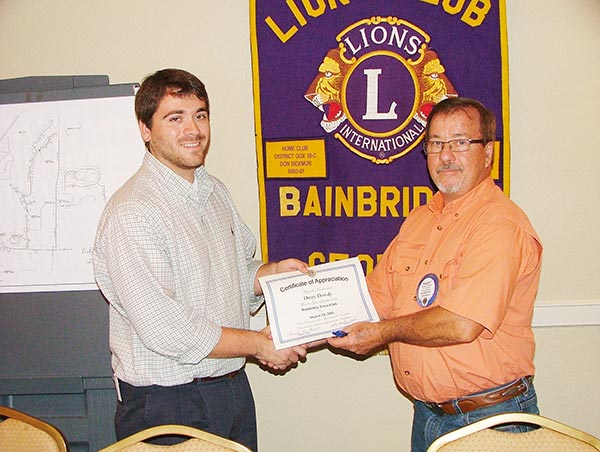 Bainbridge Deputy City Manager Dustin Dowdy brought the Bainbridge Lions Club up to date on sewage improvements and renovation of the College Street park, during a Wednesday address at the Charter House Inn.

“Right now we are getting ready to begin phase two of the Lake Douglas area sewage project,” Dowdy said, in opening his remarks. “It will begin on Sara Street, go up College Road and proceed up to Twin Lakes Drive.

“Popco Company of Sylvster got the bid to do the project which will cost approximately $5.3 million. They did a great job earlier on our Sewage Treatment Plant project. There are about 200 houses in the area.

“The large majority of city residents still have septic tanks.

“As far as any inconvenience that might occur while the sewage work is going on, Popco has assured us that they will take precautions to make sure it is not a traffic hazard.

“We know that school buses, emergency vehicles and regular traffic need to get in and out of the area and we don’t see it as a problem.”

Dowdy opened his remarks about College Street Park by pointing out that it is the most popular park in the city.

‘Many of you or your family members might have played there as kids, or been to a birthday party there,” he said. “It is a great place for kids and adults to gather and have fun.

“When completed, the renovation will include a paved parking lot on the east end of the park, a couple of pavilions with cooling fans and one large pavilion with cooling fans for large families. If everything goes well, the park should be open by the end of next week.”