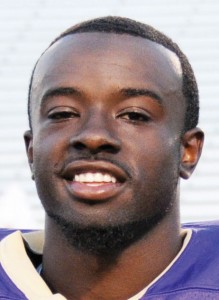 Shawn Samuels, a senior All-Region 1-AAAA wide receiver, defensive back and punt and kickoff returner for the Bainbridge High School Bearcats last season, will be taking his gridiron talents to the Marshall University Thundering Herd next season.

Samuels and his father Stevie Connell, who legally adopted him recently, plan to travel to Marshall this weekend so he can enroll in classes Monday. He is the son of the late Deloise Samuels.

Samuels originally signed with the University of Alabama-Birmingham (UAB) Blazers, who released him from his scholarship. Marshall plans to redshirt him his freshman year.

When he visited the Marshall campus recently in Huntington, W. Va., his guide was former Bearcats running back Philip Gamble.

Last season, Samuels, who made All-Area along with All-Region 1-AAAA, had 36 tackles, one interception and four pass breakups. He was also an outstanding sprinter on coach Larry Cosby’s Bearcats track team.

“I really enjoyed my trip to Marshall,” Samuels said.

“I really liked coach Holliday, his coaching staff and everything about Marshall,” Samuels said. “ Philllip Gamble was a great host.”