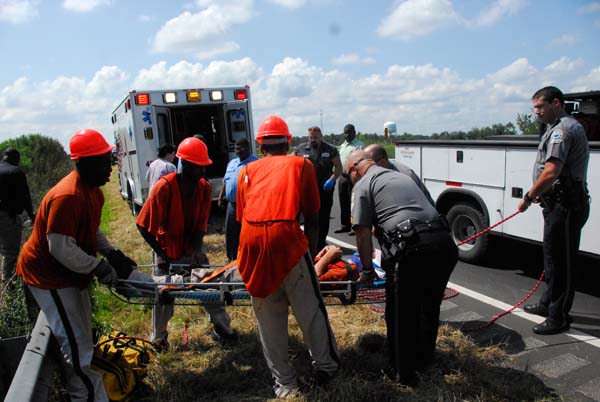 A Decatur County Prison inmate was injured Thursday morning, when he fell down a steep hill off U.S. Highway 27 North.

The accident happened shortly after 11:30 a.m., near a bridge that crosses over the CSX Railroad, just north of Dothan Road. Inmate Joshua Barton, 29, of Valdosta, Ga., and other inmates were clearing thick brush next to the highway when Barton slipped and fell about 10 to 12 feet down the steep slope, Warden Elijah McCoy said.

Barton landed in a hole at the base of the hill that was several feet deep, McCoy said. The other inmates on the work detail quickly cut through the brush down the slope to get to where Barton was. Meanwhile, 911 was called, bringing an EMS ambulance and multiple Bainbridge Public Safety officers.

EMS personnel drove further north towards Bethel Road and used a dirt access road to get closer to where Barton lay at the bottom of the hill. Meanwhile, a chain of BPS officers lowered down a Stokes rescue basket using rope.

Although Barton was shaken up after the fall, he was not seriously injured, McCoy said. Emergency-room doctors gave him some medicine for back spasms and he was returned to the warden’s custody at about 3:30 p.m. Thursday. 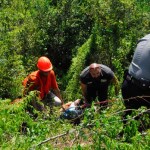 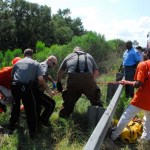 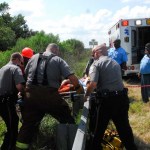 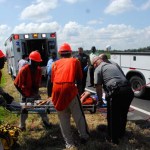