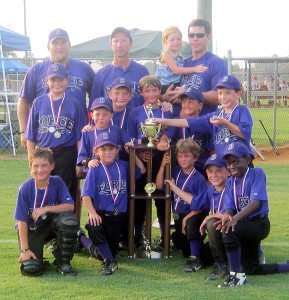 “These kids are dedicated, and just want to play ball,” coach Hawkins said. “We went to our first tournament in early July and finished second out of five teams, and that just fueled the desire.”

The team’s next tournament resulted in a third-place finish, but last weekend they got their first tournament victory at Quitman.

“We were hoping to give the kids the opportunity to play a little more baseball, and work on their skills, but winning a tournament was icing on the cake,” Poitevint said. “It just goes to show you what a dedicated group of kids and parents can achieve in a short period of time.”

“Sometimes, especially in the summer, it’s asking a lot for a player to show up to practice twice a week and give up their weekends to travel out of town,” Conder said. “We’re very appreciative of these families and their commitment.”

The Force will play their final tournament of the summer Sat., Aug. 13, in Cairo.