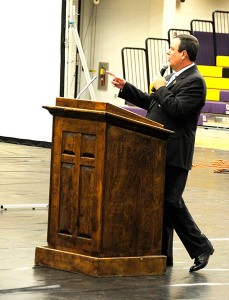 Decatur County School Superintendent Dr. Fred Rayfield recently urged hundreds of employees of the county school system to be “great,” and not just “good,” in the coming school year.

Rayfield spoke at 9 a.m. Monday at the Bainbridge High School gymnasium, in an hour-long speech that he hoped would pump up the school system’s faculty. The gymnasium’s bleachers were filled with all the schools’ employees.

“We walked into this room today knowing that we’re all good at something,” Rayfield said. “But ‘good’ is the archenemy of us moving to the next level, which is ‘great.’”

Rayfield presented a short video that detailed several “good companies” that are now significantly smaller or extinct, because they did not learn how to adapt to changing times and challenges — including Smith-Corona typewriters and A & P supermarkets.

“We cannot close our eyes to the issues we face,” Rayfield said.

He noted that schools face challenges from a variety of sources, including apathetic parents, cuts in funding and changes in curriculum and testing. He quoted the late President Ronald Reagan, who said, “There are no hopeless situations. There are only men and women who have grown hopeless about them.”

Rayfield said one way to react to the challenges of modern life is to adapt to them, and be willing to change old methods that may no longer be applicable.

“We’ve got to get away from the mindset of ‘this is the way we’ve always done it,’” he said. “If we continue to do things that don’t work, then we’re going to continue to get negative results.”

Rayfield also noted that all employees have an effect on the school system, even the non-teachers. He said that all faculty have to have a positive attitude that is conducive to a positive learning environment.