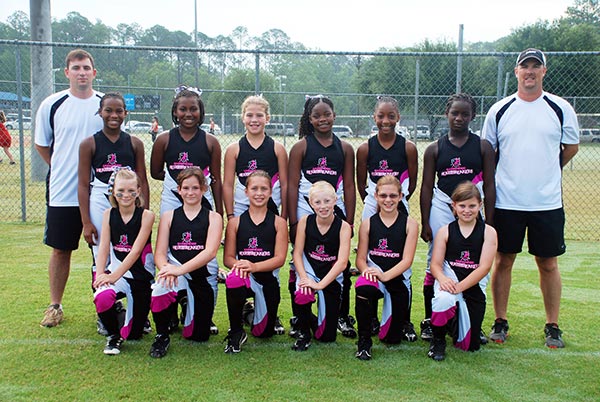 After winning six straight games to capture the District championship in Moultrie, Ga., they traveled to Vidalia for the July 6 through 9 state tournament where they went 2-2.

In their two state tournament victories, the Bainbridge All-Stars outscored their opponents 22-1. They shutout Effingham County 7-0 and defeated Hogansville 15-1.

In their state tournament shutout win over Effingham County, Bainbridge’s District champions scored two in the first, two in the third and three in the sixth. Bree Powell singled in a run and scored a run in the first.

Shelbie Summerlin started the two run second inning rally with a one out single. She moved up to second on a fielder’s choice and came in on a two out single by Desirae Beachem.  Anna Beth Bibby singled to drive in Beachem.

The three sixth inning runs were scored by Powell and Beachem, who singled, and Makayla Hamilton, who reached on a fielder’s choice.

The Bainbridge All-Stars put the game with Hogansville away early, taking a 5-0 first inning lead.

Beachem then blasted a three-run home run with Summerlin and Powell aboard. Bibby singled, moved up to second on a fielder’s choice, and came in with the fourth run on a two out single by Mallie Kate Andrews.

The Bainbridge All-Stars also scored four runs in the fourth inning. Big blow in the inning was a two run single by Addison Enfinger.

Tyra Blocker scored their run in the fourth inning in their loss to Douglas. She singled, moved up to second on a single by Thyra Jackson and came in on a single by Beachem.

In their final loss to homestanding Vidalia, the Lady Cats scored single runs in the third and sixth innings.