Bearcats to have annual midnight practice 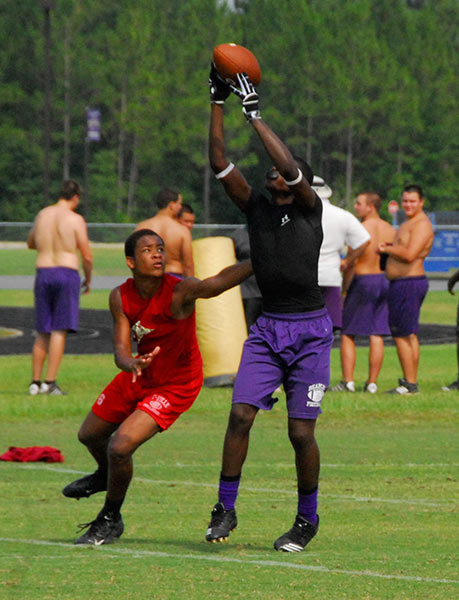 BHS sophomore wide receiver Aaron Calloway stretches up to catch a pass during a passing camp held with the Thomasville Bulldogs in Bainbridge on July 13.

“It is our tradition to have an early morning workout in pads the first day we can officially go into them,” coach Pilcher said.

During camp, which will end next Wednesday, the Bearcats players and coaches will stay in the school gymnasium.

Tomorrow, Thursday, July 28 the Bearcats will hold a pre camp passing session with seven visiting schools on their practice field. It will get underway at 4:30 p.m.

Visiting schools attending the passing camp will be Cairo, Thomas County Central, Chiles and Leon of Tallahassee, Fla, Eufaula, Ala., Northview of Dothan, Ala. and Abbeville, Alabama.

The Bearcats’ offense will be led by senior Quincy Fortson and sophomore Preston Norris.

Cairo and Thomas County Central both look to have new quarterbacks this season. For Cairo, it’s a familiar face—former Bearcat Steven Bench, who moved to the Syrupmakers along with his father, Steve Bench, over the summer. For TCC, it’s highly-touted sophomore Adam Choice, a quick, athletic rusher who impressed on his junior varsity squad last year.