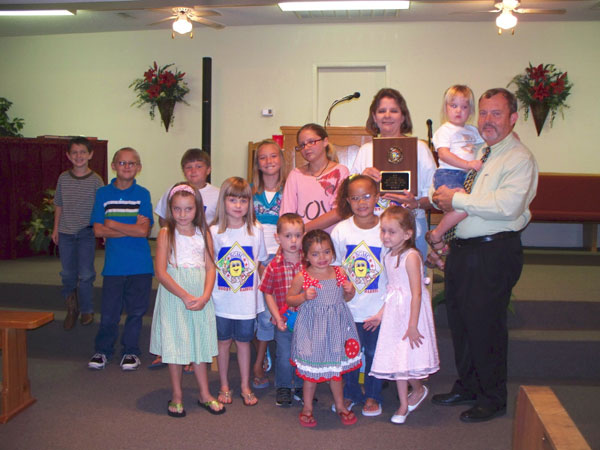 FIRST ASSEMBLY OF GOD OF DONALSONVILLE is honored for their outstanding support of missions through Boys and Girls Missionary Challenge (BGMC), which is the children's missions program of The General Council of the Assemblies of God.

Pastor James Scarborough had the honor of presenting the children of First Assembly of God of Donalsonville with a national award for their outstanding support of missions through Boys and Girls Missionary Challenge (BGMC), which is the children’s missions program of The General Council of the Assemblies of God.

During 2010, First Assembly of God came in 29th place nationally in their division.

Monies received through BGMC are used by Assemblies of God missionaries to purchase materials and other items used in their ministry.

“This is the fourth year in a row that our children have received national recognition for their involvement in this vital missions program. We invite Children’s Church into our main service on the first Sunday of each month so we can all participate in their BGMC offering. Words cannot adequately describe the excitement and enthusiasm that they demonstrate during that time. I am proud of what is taking place here and the impact that it is having on our children, and I am thrilled to know that our children are actively involved in a program that is touching the lives of children all over the world,” Scarborough said.

Children’s Church and BGMC at First Assembly of God is led by Gale Scarborough, who is much appreciative of a host of dedicated, hard working and patient ladies assisting her.