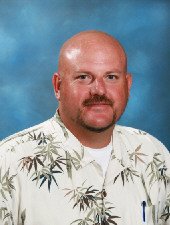 David Kirkland, a former teacher and coach with Decatur County Schools, has been hired as principal of Miller County Elementary School in Colquitt.

The paper reported that Miller County School Superintendent Robert McIntosh, who was former principal of West Bainbridge Middle School, made the recommendation to hire Kirkland and it was approved unanimously.

Kirkland was employed by the Decatur County Board of Education for the past eight years. He is also a former Bainbridge Public Safety officer.

“Mr. Kirkland will bring a tremendous amount of leadership ability to our school system,” Superintendent McIntosh told the Liberal.

Kirkland is originally from Orlando, Fla., and moved to Bainbridge in 1980. He is an alumnus of Bainbridge High School and spent 13 years in law enforcement in the city before being hired to teach at West Bainbridge Middle School in 2003.

He has a wife, Pam, two daughters, Macayla and Aerin, and a son, Chris. They live in Climax.