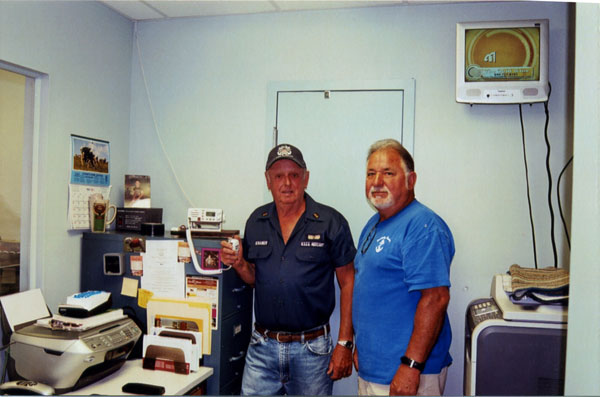 Have you ever had boat engine problems while fishing or cruising?

Then, as you look around, there are no other boats in site. You begin to wonder where you can find help. This can make you feel stranded and very lonely.

Or perhaps there is an accident and urgent help is needed.

In both situations helplessness sets in because we realize that we are not in control of the situation. This can be somewhat frightening.

However, now, when you are cruising the Flint River, up in the Bainbridge area, you can feel secure.

Bainbridge Marina now has a marine radio, which they monitor during marina hours.

This radio was a joint effort between Billy and Lynn Birdsong, managers of Bainbridge Marina, Coast Guard Auxiliary members Dale Kramer and Garland Pendergraph, and the City of Bainbridge.

The Birdsongs offered the marina, the Coast Guard provided the radio, aerial and cables, while the City of Bainbridge put up the pole and mounted the aerial.

Billy, Dale and Garland worked together to hook up the radio while the City of Bainbridge did the outside work of cementing the pole and mounting the antenna.

The idea for an additional radio on Lake Seminole started around Thanksgiving of 2010. Billy, Garland and Dale were talking about the need for some communication up the Flint River near Bainbridge because this section is the busiest on the whole river.

There is a radio at the Coast Guard Station but that is down by the Woodruff Dam. It also is not monitored full time.

With this area of the Flint being crowded with boats, something close by was needed. Bainbridge Marina is right there. Also, the Birdsongs are at the marina everyday. When asked they were all for it. They now monitor the emergency channel 16 and talk on channel 18.

Safety has been lax in this area where there have been some horrific accidents. Even children have been involved. Also, there have even been fatalities. Every one is in hopes that knowing the radio is there, will encourage safe boating practices.

Many thanks to the city for their help in installing the radio. Thanks to the Birdsongs for making the radio possible. We now have additional safety tool on Lake Seminole.

Culture Man to the Rescue!

By TARYN BROWN Community Relations Librarian Join us on Tuesday, June 21, at 10 a.m. at the Decatur County-Gilbert H.... read more