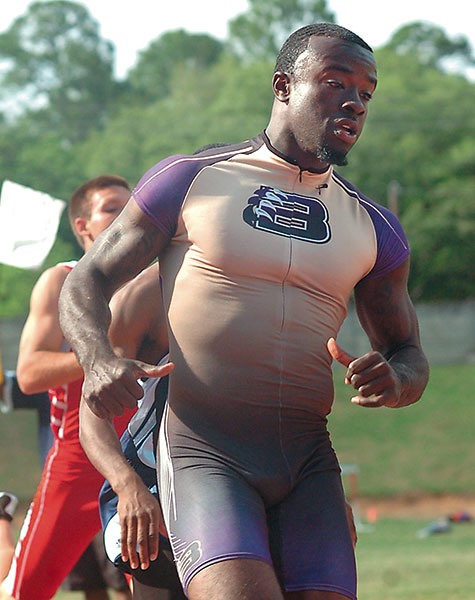 Shawn Samuels competes in the finals of the Region 1-AAAA meet in Albany on Tuesday, April 26. | Joe Bellacomo

Senior sprinter Shawn Samuels won Region championships in the 100-meter and 200-meter dashes with times of 10.97 seconds and 22.19 seconds.

Samuels also anchored the Bearcats 4-by-100-meter relay team that finished second in 42.91 seconds, barely behind Hardaway, which won in 42.62 seconds. On the team with Samuels were Octavious Scott, Brandon Handsford and Rohan Gaines.

Rhyan Edwards finished third in the 400-meter dash with a finals time of 51.04. Ausgood finished second in the 800-meter dash and was followed by Hubert Thomas with a time of 2 minutes, 5.36 seconds.

The Bearcats were very strong in the field events Tuesday.

Overall, Bainbridge finished with 151 team points, ahead of Hardaway with 105.5 points and Warner Robins with 99 points.

Bainbridge College’s Relay for Life team will have a unique one-day fund raiser Sunday, May 8 on campus. Activities will... read more