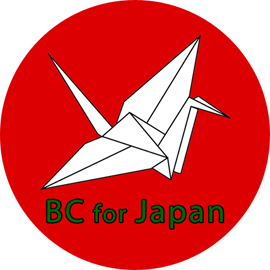 Bainbridge College student leaders created a week of activities centered on Japan that will culminate with a candlelight vigil and fund-raiser for victims of Japan’s recent natural and nuclear disasters.

The Thursday, April 28, vigil starts at 7:30 p.m. at CenterStage in the central green space of the quadrangle of buildings on the Bainbridge College (BC) main campus.

Candles will be provided or participants may bring their own, said Student Government Association (SGA) President Jana Simmons of Cairo. She noted that donations will also be accepted during the event and all the donations for relief efforts will go to the Japanese Red Cross through the Asian Coalition of Tallahassee, Fla.

The event logo was created by BC graduate and graphic designer Ansley Simmons.

Throughout the week, students will sell cutout paper cranes for $1 as part of the fund-raiser and will have them at the candlelight vigil. The students selected the paper cranes for their fund-raising since there is a tradition in the Japanese culture of the crane as a symbol of hope.

SGA President Simmons noted that BC students, faculty and staff will help collect the donations.

Cultural events set for Monday through Thursday include a Haiku contest, whose winners will read their poems at the vigil; a Taste of Japan, and two showings of films about Japan.

The vigil will include the reading of a traditional Japanese poem, and John Vanzo, who taught in Japan, will speak.

Over time there has been an increasing interest in the Mirena, and I think there are good reasons for that... read more