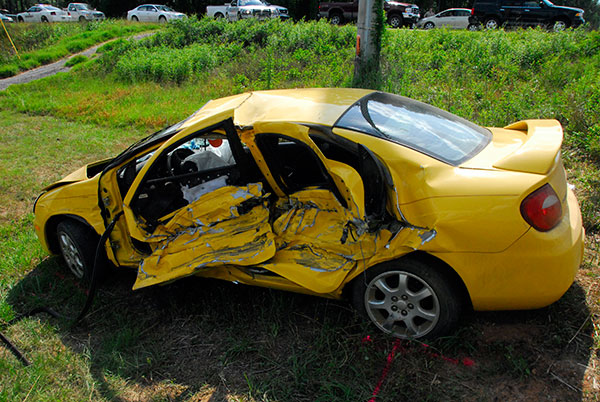 A DODGE NEON, that was struck by a pickup truck at the intersection of Shotwell Street and College Road on Friday afternoon, lies at rest at the bottom of a drainage ditch in front of Bainbridge College.

Four people were hurt, including two seriously, in a Friday afternoon wreck near Bainbridge College.

The wreck happened at approximately 3:50 p.m. at the intersection of Shotwell Street and College Road.

An woman and her infant niece were seriously injured in the crash after a pickup truck smashed into the driver’s side of their car, according to Bainbridge Public Safety officers.

An emergency medical helicopter landed at Memorial Hospital at about 5:20 p.m. to pick up the baby and transport her to a hospital in Tallahassee, Fla., Sgt. David Cutchin of BPS said. Sgt. Cutchin said the baby reportedly had broken bones but was otherwise stable. The woman driving the Dodge Neon involved in the wreck was first taken to Memorial Hospital and was later transferred by ambulance to a Tallahassee hospital.

Two other children in the car may have been injured as well; one of them was reportedly taken by ambulance to Memorial Hospital in Bainbridge. A man who had been riding in the front passenger seat of the car appeared unhurt, officer said.

While the crash was still under investigation late Friday afternoon, officers described what they believed happened based on their initial observations.

BPS officers said it appeared that a yellow Dodge Neon driven by an adult female was traveling east on Shotwell Street. As the Neon was proceeding through the intersection, a white Ford F-250 driven by a young man collided with the driver’s side of the car. The car spun around and slid down an embankment into a drainage ditch.

The pickup driver, who had been going west on Shotwell Street, stated to officers that he was attempting to turn left onto College Road when the accident happened, said Sgt. Cutchin, who stressed that the accident was still under investigation by Officer Archie Mills Jr.

“A large truck may have been blocking the pickup driver’s view [of the Dodge Neon] just before he attempted to turn onto College Road,” Sgt. Cutchin said.

The pickup driver pulled off the side of the road after the accident. He was uninjured but was emotionally upset about the accident, officers said.

BPS Sgt. David Cutchin said that when he arrived at the scene of the wreck, he found the baby girl in a car seat and noticed she was unconscious and not breathing. Cutchin said he and other officers arriving shortly after him pulled the car seat out, with baby still in it, through the rear driver’s side window, which had busted. Both driver’s side doors were crushed inward from the force of the crash.

Cutchin said the driver, said to be the aunt of the baby, was lying in some shrubbery at the base of the embankment when he arrived. BPS officers said the aunt was bleeding and had visible injuries that appeared serious.

Two EMS ambulances arrived and about 10 minutes after the crash, one rushed the baby to Memorial Hospital.

Georgia state troopers were assisting BPS officers with the crash investigation. The identities of the people involved in the crash were not immediately available for release, according to BPS.

The Decatur County Board of Commissioners will meet Tuesday, April 26, at 7 p.m. in their chambers at the County... read more