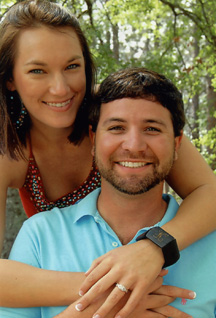 The bride-elect is the granddaughter of Melvin and Helen Knight, and Bonial and Marlene Vickers, all of Whigham.

She is a 2004 graduate of Cairo High School and a 2008 graduate of Valdosta State University with a Bachelor of Science in Early Childhood Education.

She is employed by the Thomas County School System and currently working in a pre-kindergarten class with Hand-in-Hand Primary School.

The groom-to-be is the son of Neel and Krista Parramore of Coolidge and the grandson of Eugene and Barbara Reynolds of St. Petersburg, Fla., and the late Maurice and Laverne Parramore.

He is employed with MMM Surveying in Thomasville, Ga., and Hal Mills and Associates of Bainbridge.

The wedding will take place at Conehaven Plantation in Thomasville on May 14 at 6:30 p.m. Friends and relatives are invited to attend.