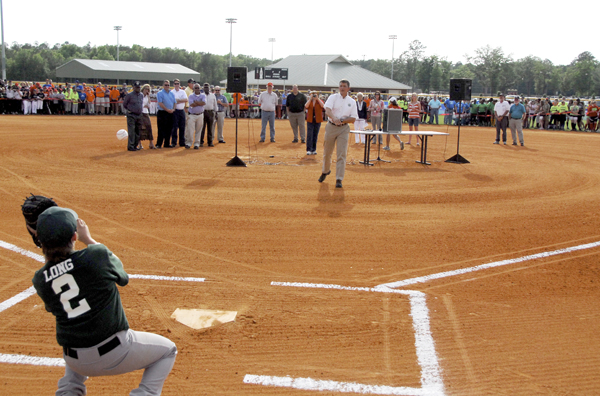 The cutting of a ribbon officially dedicating the new eight-field youth baseball and softball complex at Bill Reynolds Sports Park signaled the beginning of a special Monday evening.

881 players representing 68 youth teams marched into the complex behind the American flag to officially open the 2011 youth T-ball, baseball and softball seasons.

Among those taking part in the ribbon cutting were Mayor Edward Reynolds and his mother Mrs. Sug Reynolds, the son and wife of former late Bainbridge Mayor Bill Reynolds, for whom the complex is named. Members of the city council and contractors who had worked on the complex were also there.

Longtime Bainbridge Leisure Services employee Al Kelley, who helped research and bring the third phase of the sports park to fruition, welcomed the audience and expressed his appreciation to all those who worked hard to make the beautiful new complex a reality.

“This is a beautiful facility with beautiful fields that youngsters will have an opportunity to participate in many exciting games on this year and for years to come,” Kelley said. “I urge everyone to keep it beautiful by picking up litter every time you see it.”

In his remarks to the crowd, estimated by Leisure Services Department program director Diane Atkinson to be in excess of 2,000, Mayor Reynolds talked about the great positive legacy his father left for youth and youth sports.

“My dad loved the youth and their sports programs,” the mayor said. “I feel very honored to be able to carry on that great legacy.”

Following those remarks, the mayor threw out the first baseball and softball to officially open the two youth sports seasons.

Catching the the first baseball pitch were Griffin Long, son of Bainbridge City Councilman Phil and Diane Long and a member of the 11-and-12-year-old L&L Trucking Company baseball team coached by his father. Catching the first softball pitch was Desirae Beachem, daughter of Elaina Beachem of the 9-and-10-year-old Flint River Retrievers and Supplies softball team coached by Jeff Summerlin. She was an All-Star as a 7-and-8-year-old last season.

The activities concluded with program director Atkinson reading the names and sponsors of each team along with their coaches as they looked on gathered around the field.

“Now it’s time to play ball,” she said in conclusion.” 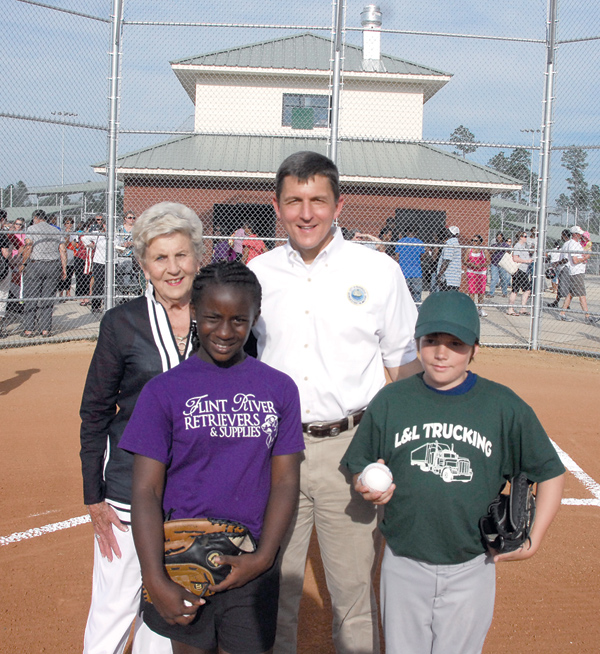 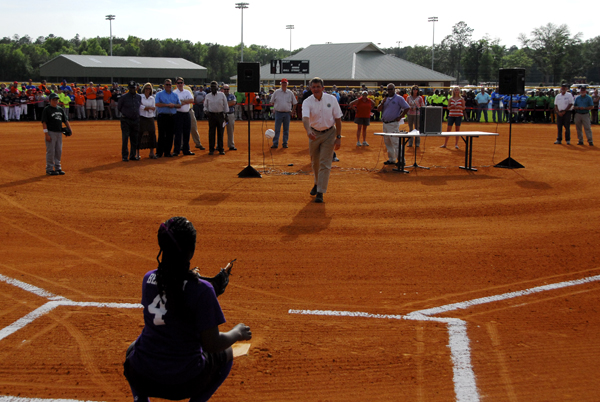