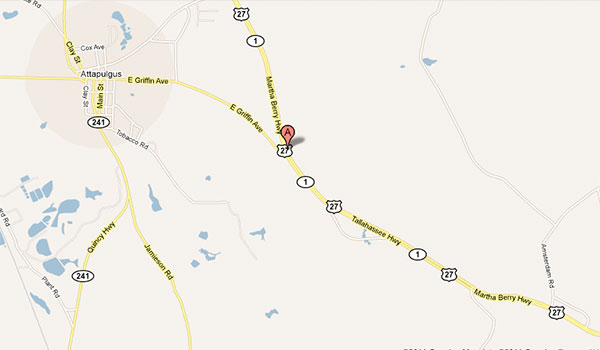 Five Decatur County residents were killed, and four other people were injured after an two-car crash late Wednesday night on U.S. 27 South near Attapulgus.

The accident happened at about 11:20 p.m. Wednesday, about two miles south of the intersection of U.S. 27 and E. Griffin Avenue, according to E-911 logs.

Georgia State Patrol Sgt. Marc Godby said a Nissan 350Z driven by Gregory Mosley of Attapulgus, Ga., was going at a high rate of speed when it rounded a curve in the road and he lost control of the vehicle. Mosley’s Nissan slammed into a Mazda 626 that had stopped on the side of the road.

Godby said the Mazda had seven people in it because it had picked up some people in another car that was disabled. The driver of the Mazda sedan, 22-year-old Ashley Moten, was about to leave when the accident occurred. Four people were trapped inside the Mazda when state troopers arrived on the scene.

Mosley and his son, 26-year-old Phillip Mosley, were both ejected from the Nissan, Godby said.

Moten and two of the six passengers, 23-year-old Kedric Footman and Joycelyn Alexander, were pronounced dead at the scene by Coroner Peter Bruton.

The other four passengers in the Mazda—Rachel Harrell, Teddy Jones, Anastasia Footman and Jessica Alexander, all of Decatur County—were taken to area hospitals.

Jessica Alexander, an 18-year-old senior at Bainbridge High School, passed away on Thursday at Tallahassee Memorial Hospital, according to Bruton.

Phillip Mosley—who was originally reported killed, had not been pronounced dead by Bruton. Mosley is being treated at Tallahassee Memorial Hospital, according to GSP’s Sgt. Godby. Mosley was in stable condition on Thursday evening.

Harrell, Jones and Anastasia Footman were transported to Memorial Hospital in Bainbridge and were treated and released, said Jan Godwin, spokeswoman for the hospital.

Local therapist tried to save lives

Lacey Addison, 21, of Decatur County, was traveling south on U.S. 27 with her boyfriend when they came upon the Mosleys’ car. They pulled over when they saw another motorist who had stopped to check on the accident victims.

Seeing both Mosleys lying in a ditch, Addison called 911. Although both father and son were still breathing and had a pulse when Addison first checked on them, she could tell they were bad off.

“The wrecked cars looked so bad and the other motorist who had stopped told me five people in the other car were hurt,” Addison recalled. “I told them the two patients I was with were in critical condition and that we’d need as much help as we could get.”

Soon after relaying more information to 911, she noted Gregory Mosley had stopped breathing and did not have a pulse. A respiratory therapist at Southwest Georgia Medical Center in Valdosta, Addison administered two rounds of CPR chest compressions on the father, managing to get his heart beating again.

State troopers and Emergency Medical Service personnel arrived on the scene. EMS personnel gave Addison equipment she used to help the Mosleys keep breathing. An emergency medical helicopter landed on the highway and picked up Phillip Mosley. Gregory Mosley was loaded onto a Gadsden County (Fla.) ambulance. Another emergency medical helicopter landed soon after near Moten’s car and picked up a patient, according to Addison.