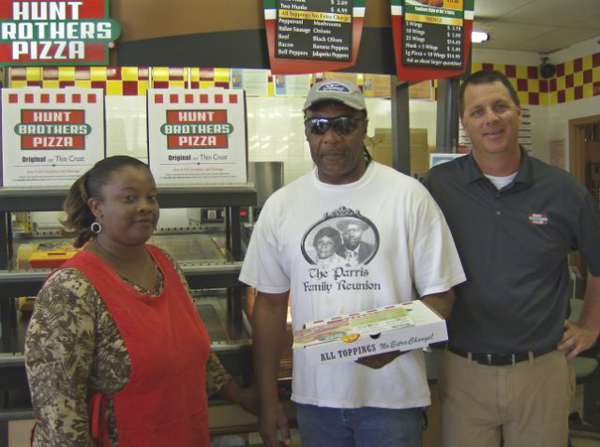 You go to the freezer to get one of those “taste like fresh” frozen ones only to find you are out. You either give up or make a trip to Bainbridge.

Pizza has come to Climax!

On March 22, Quick Buy in Climax held a grand opening of Hunt Brothers Pizza with Bill Parrish getting the first out-of-the-oven pizza. Parrish was anxious to give the pizza a try.

Store Manager Nikki Hall said the grand opening of Hunt Brothers Pizza marked a first for Climax; while there have been restaurants in Climax before, this is the first pizza deli.

Representative for Hunt Brothers Pizza, Matt Mitchell, said one could get pizza and hot wings as well as southern wings, and even a breakfast pizza with eggs, sausage, cheese, bacon, etc.

Nikki said one may call ahead and order as much as they like or can purchase by the hunk, which is a quarter of a large 12-inch pizza with a choice of toppings. There is no extra charge for all toppings on a pizza. Several combinations are also available.

With the smell of fresh baked pizza permeating around the store and samples available, comments like, “Umm good!” could be heard from those attending the grand opening.

Nikki said, “So get out of the freezer digging for the frozen one and come on down to the Quick Buy deli, and I’ll make you a fresh pizza in Climax!”