A parent’s complaint to school officials about her child being paddled has been resolved satisfactorily, School Superintendent Fred Rayfield said.

Last Wednesday evening, the mother of a student at Jones-Wheat Elementary School reported to Bainbridge Public Safety that her child had been punished by Principal Larry Clark. The mother stated her son had been paddled four times with a wooden paddle and showed an officer bruises on her child’s buttocks.

According to Rayfield, the child in question was not punished for fighting with other students, as had been stated in the BPS incident report. However, the superintendent said he could not comment further on the details of the incident out of regard for the student’s privacy.

Rayfield stated that he now considered the matter satisfactorily resolved after the mother had meetings with the superintendent and Clark and with school administrators at Jones-Wheat.

“The meetings went very well,” Rayfield said. “The staff at Jones-Wheat are going to make adjustments related to the treatment of that student.”

According to Rayfield, Clark followed the Decatur County School Board’s policy for the use of corporal punishment.

Among the requirements of the policy, corporal punishment shall not be administered to a child whose parents or legal guardian file “a statement objecting to its use or from a medical doctor licensed in Georgia stating that is detrimental to the child’s mental or emotional stability.”

Rayfield said each student’s parents/guardians are given the opportunity to select whether they approve or disapprove of corporal punishment at the start of each school year. At any time during the school year, parents can change their preference.

“If a parent were to say, for example, that their child is in sixth grade and they don’t want him paddled for the rest of his school career, then we honor that,” Rayfield said.

It’s up to the principal of each school to decide whether or not corporal punishment will be a part of their school’s discipline plan or not.

Rayfield said the school board is currently in the process of reviewing its entire policy manual, including the corporal punishment policy.

The repeated paddling of a third-grader at Potter Street Elementary in February 2009 prompted a public debate about whether paddling should be allowed in local schools. 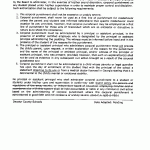