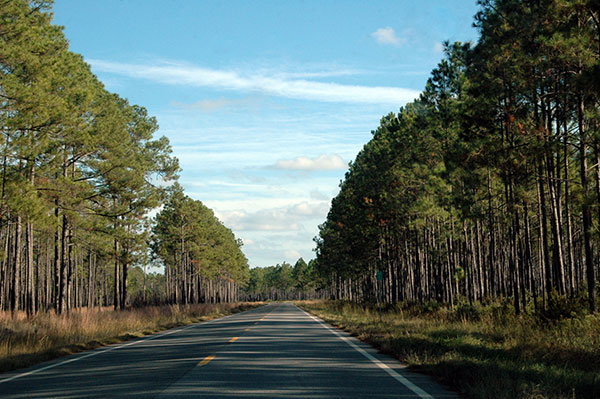 Photo by Brian Brown, vanishingsouthgeorgia.com | Georgia Highway 177 in Clinch County, which runs through the Okefenokee Swamp National Wildlife Refuge, represents the kind of rural roads that could be improved with money from a regional transportation tax Georgia voters will weigh in on in August 2012.

Bainbridge and Decatur County may soon get a chance to partner with other Southwest Georgia governments on regional transportation projects.

Georgia voters will weigh in on a proposed transportation tax in a primary election to be held August 2012. The Transportation Investment Act of 2010, passed by the Georgia Legislature last year, set up the process by which money from the proposed tax could be spent on projects.

If the one-cent regional tax, known as T-SPLOST, is approved, 75 percent of proceeds will be used to fund projects on a final list approved by a regional roundtable. The roundtable’s members are comprised of state representatives and local elected officials defined by the Transportation Investment Act.

Twenty-five percent of the tax’s proceeds would be given back to local governments. Local distribution would be determined by a formula based on one-fifth population, four-fifths lane miles. In the area covered by the Southwest Georgia Regional Commission, there are 14 counties and 44 cities, each of whom would get a share.

Proceeds from the tax could be used for a variety of projects, including resurfacing, bridge repair and paving dirt roads.

According to Todd Long, the Georgia Department of Transportation’s director of planning, it’s estimated that in 2013—the first year money from the tax would be generated—the tax would raise an estimated $45 million within Southwest Georgia. About $33 million will be allocated for projects of regional importance, while the local share will total about $11 million.

The criteria adopted by the regional transportation roundtable state that projects should: Support Georgia’s economic growth and competitiveness; assure safety and security; maximize the value of Georgia’s assets; and minimize impacts on the environment.

DOT’s Long recommended projects should be those that provide value to taxpayers; be delivered on time and on budget; be able to be completed within the 10-year period and have already been included on a list of local priorities.

Projects can also use other sources of funding; such as traditional state transportation funding or SPLOST, which is approved every five years by voters.

The committee responsible for creating the list of regional projects has the capability of affecting another state transportation program known as the Local Maintenance Improvement Grant (LMIG).

If Southwest Georgia, one of 12 regions that will consider T-SPLOST, fails to approve the tax, the state government may contribute less to LMIG projects within the region.

Decatur County Commissioners held a work session on March 3 to develop a list of priority projects that could benefit from the regional transportation tax, as well as other state and federal transportation funding.

Next summer or fall, there will be two public hearings concerning the regional project list. A five-member citizen review panel for Southwest Georgia will be appointed by the speaker of the Georgia House and the lieutenant governor to ensure the project progress is going OK each year.

The list of regional projects will be accomplished over a 10-year period. The final list must be approved by the roundtable no later than Oct. 15, 2011.

The Southwest Georgia Regional Commission will host a roundtable meeting concerning the proposed transportation tax on Monday, March 14. The meeting, which is open to the public, will take place at noon on the second floor of the regional commission’s office at 30 W. Broad St. in Camilla, Ga.