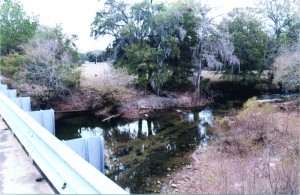 THE VIEW FROM THE BRIDGE is a little different today. The dark, thick woods are gone, and on this day the waters were fairly low.

The legacy of the old wooden White’s Bridge is ominous.

It was the scariest bridge that there ever was.

Believed to have been built in the very early 1800s, its planks were worn and bumpy. Through gaping spaces between these one-by-sixs, you could see the dangerous waters of Spring Creek swirling and falling below.

Worse than being rickety, this bridge was barely wide enough for one carriage to pass over. If two would meet, one would have to wait or pull off of the bridge. However, none of these reasons were worse than the final, frightening blow.

This bridge had no sides!

Some folks simply described it as a nightmare!

It creaked and groaned under the weight of a person on foot. You can imagine what it must have been like when vehicles crossed over.

Even the approach to the bridge was not for the faint of heart, because just past Pilgrims Rest Baptist Church, the once dirt road makes a very sharp, very dangerous curve, which required the horses and carriages to go slow or risk sliding into the rocks and water below. To make it more treacherous, and for reasons unclear, this dirt road always was a little slippery.

Adding to the bone-chilling effect, there once were thick black woods on both sides of the old narrow bridge.

Every now and again, the bridge would fall in, only to be propped up again, and straightened out by the county.

When you have something so intimidating, stories abound.

For example, a tale from the 1940s is told about a truck from Florida that was loaded with oranges. It tried to cross the bridge but this structure did not want to cooperate. It separated under the weight of the vehicle and dumped the truck and its cargo into Spring Creek. Hundreds of oranges went bobbing down stream at the mercy of the waterfalls and current. They ended up at the junction of the Flint and Chattahoochee rivers. Then they went on down the Apalachicola River.

Another tale tells of a pulpwood truck whose weight caused the bridge to collapse. With a huge heave and groan, the bridge, as well as the truck, sunk into the creek bed. Logs went everywhere. As for the bridge, the dark green waters of Spring Creek drowned the sagging mess of timbers that once was White’s Bridge.

The bridges’ claim to fame goes even deeper, touching on the occult and into stories of hauntings. These are legends that were told at night from the safety of the front porch. Passed from one generation to another, they have evolved.

Generations have visited the bridge for a variety of reasons. Some are trying to see the ghost or ghosts that are searching for a place to rest in peace.

Some people are trying to solve the puzzle as to which of several stories is the right one. Perhaps all are true, to a point.

Still, others come and visit just to scare or be scared to death. Some find it fun to tell the stories on Halloween. Others gather to have a séance and try to contact the tortured soul(s) that inhabit the bridge, the woods and the creek.

We also have the skeptics, those who do not believe in ghosts or hauntings. These people mostly remember White’s Bridge as a great place to put your boat in the water and go up or down Spring Creek to fish, then end the day with a picnic. However, even these folks say that they did hear of the ghost(s) and the stories told over a campfire at night. They did look around them and they did recall the hair on the back of their necks rising.

The wooden bridge was still in existence in the late 1950s. It was replaced with the current concrete bridge after the Woodruff Dam was built. However, just because this is a new and stable bridge does not mean that it has taken away the spine-tingling stories and stopped the hauntings.

In the next couple of weeks, I will tell of the legends and of the history at White’s Bridge. Then, you can decide if you feel it could be haunted. You can always go visit it in the dark!